Email Remains Dominant Technology For Work, 'Social' Is An Also-Ran

For all the focus on social media and the next generation of bright shiny communications technologies, the most important “digital tool” in the workforce is one of its oldest -- email. Social media, by contrast, barely even registers, according to the most recent findings from the Pew Research Center’s ongoing tracking study on the way the Internet impacts society.

“The high value of email comes despite the challenges of the past generation, including threats like spam and phishing and competitors like social media and texting,” write  research consultant Kristen Purcell and Pew Director of Internet, Science and Technology Research Lee Rainie in the report being released this morning.

Another counterintuitive finding in the report is that landline phones outrank mobile phones among the Internet-using workers surveyed in the report.

“Social media is very low in importance,” the authors emphasized, adding that email and the Internet, in general, were especially important among adults who work in “white collar,” office-based occupations, such as “professionals, executives, managers, business owners, and clerical workers.”

Overall, 61% of adult workers cited email as “very important” to doing their job, followed by the Internet (54%), landline phones (35%), mobile cell phones or smartphones (24%), and social networking sites like Twitter, Facebook and LinkedIn (4%).

The finding is consistent with a variety of other research that has begun to come to light in the past couple of years on the misunderstood scope and influence of email as a digital communications platform, especially so-called “dark media” studies. While not explicitly targeting office workers, research conducted by 33Across’s Tynt over the past few years indicates that email is still the dominant source of social media sharing by an incredibly wide margin of four-to-one over so-called “light social” networks such as Facebook, Twitter and LinkedIn. Other researchers have corroborated those findings.

Meanwhile, the Pew study also sheds light on the role that communications technologies have played and are continuing to play among employees that are not based in traditional offices, including telecommuters and part-time workers.

Interestingly, all digital media play a smaller role among non-office based workers, dispelling the notion of digitally connected telecommuters. Among non-office workers, landline phones (31%) are the dominant platform, followed by mobile phones (28%), the Internet (26%), email (25%) and social networking sites (2%).

On the flip side, when non-office-based workers are taken out of the equation, the role of email jumps in impo 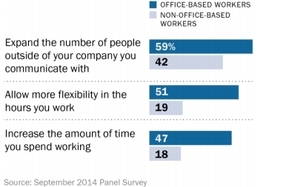 Roughly half of all employed online adults also said digital media has changed the way they work, including the number of people they have contact with (51% of respondents) and the number of hours they work (35%).

“Adults employed in traditionally office-based occupations feel all of these impacts more than those who work in occupations that are traditionally non-office-based,” the report concludes, noting: “The office-based workers are more than twice as likely as non-office-based workers to say the Internet, email and cell phones have given them more flexibility in the hours they work (51% v. 19%) but also that these tools have increased the amount of time spent working (47% v. 18%).”