CNBC Daytime To Drop Nielsen In Favor Of Cogent Reports 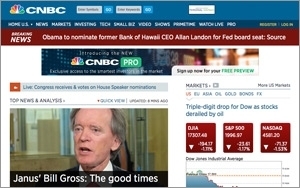 LAS VEGAS — Making a radical change to its viewership measurement, in response to what it says was its longtime problems, CNBC daytime programming will no longer be measured by Nielsen.

By the fourth quarter, the NBCUniversal channel will be measured by Cogent Reports, a research company of the financial/investment community. Cogent Reports surveys more than 700 investors and 400 financial professionals each month.

For over 25 years, the network has had problems with Nielsen in measuring key investment/financial viewers — especially those out-of-home viewers who watch in offices and trading floors.

NBCUniversal executives will be at Consumer Electronics Show later on Tuesday to discuss the change.