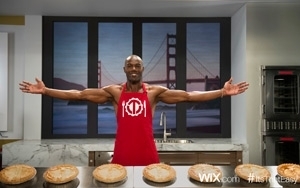 A new Super Bowl advertiser this year is the comparatively anonymous Wix. com, a service that makes super-easy-to-use Web sites for small, small businesses. It starts its push to the big game today launching the #ItsThatEasyCampaign, which will be a series of teaser ads building up to the .30 second Super Bowl spot.

It bought a position in the fourth quarter.

If it paid for its ad what everybody else supposedly did, Wix.com will have plunked down $4.5 million for the privilege. The game airs Feb.1 on NBC.

The teaser ads themselves which will begin showing up on television, online and on social media, will feature famous NFL legends in short vignettes that have something to do for small businesses they will all be forming, with the help of a new Wix-produced site.

The one ad I have seen features former wide receiver and bad boy Terrell Owens, who these days has been hanging out on “Celebrity Apprentice.” Other soon-to-be entrepreneurs are Brett Favre, Emmitt Smith, Larry Allen and Franco Harris. It  appears Owens may be marketing something called “Humble Pie.” Clever enough, but this teaser gives no indication, at all, about what this is being sold. I presume things will get a lot clearer.

Eric Mason, director of marketing and communications, is confident. “For us, this is the time to do this. If we did it last year, it would have been too soon. And if we did next year, it would be too late. This was the moment to brand.”

Wix is based in Israel—like SodaStream, which made its Super Bowl debut two years ago, Mason notes—and has over 60 million small customers. The lure of Wix is that it’s a site format for businesses with few (or no) employees, just a little money and tiny technical ability.

“There’s zero coding,” Mason points out, which makes it a great Web tool for “chiropractors, doctors, baby sitters, lawyers just starting out and for weddings where the bride and groom want a kick-ass Web site. They see Wix and say, ‘Whoa, I can do that!' ” Mason says the Wix.com ads will display that it has “the spirit to serve small businesses,” like the ones these former pro football players are (apparently really, really) starting.

The U.S. is Wix’s biggest market, but it operates in 190 countries, and so it’s been around the world enough times to know what it’s doing. There probably are only a handful of Super Bowl advertisers that claim branch offices in San Francisco, New York — and Vilnius, Lithuania and Dnepropetrovsk, which I have just learned is in Ukraine.

This year, Squarespace, which advertised last year, and GoDaddy, which has advertised 10 times before — and irritated people almost every time— are all signed them for another go. Curiously, all of them are Web site development sites, all aiming to reach the little people during the big game.

Other Web-centered companies aren’t there. The Super Bowl doesn’t have a great history with Web entrepreneurs, reaching back to the 2000 game. Eight of the newbie Internet companies that advertised that year went poof within the year, which made their failure only more conspicuous when the Internet boom itself crashed.

There’s some evidence the whole Super Bowl platform for ads ain’t what it used to be.

Big car makers are taking a pass this year. Unruly, the company that charts sharing of ads via YouTube and other places, reported that sharing from last year’s Super Bowl ads was off 29% this year and indeed, it now seems clever, memorable ads can get traction without competition from a bunch of other ads trying the same thing.

The #ItsThatEasy campaign was directed and produced by Frank Samuel, Jeff Reed and Lauren Bayer of Committee LA, working in collaboration with San Francisco creative team Jeff Huggins and Andrea Janetos. Mason rejects the idea that the forum is starting to fizzle. “Oh, not at all,” he says. “People are still watching those ads.” In the fourth quarter, the ad could get a lot of views if the game is close, but he says, even if it’s a blow out, there are still millions who will be watching only to see that ads.