One Club's Top Auto Ads To Be Awarded At NAIAS 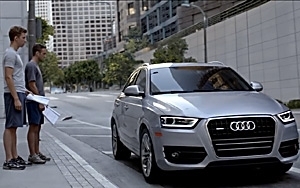 The One Club is out with the winners of its 2nd Annual One Show Automobile Advertising of the Year Awards. The awards, timed with the North American International Auto Show (NAIAS) in Detroit, spotlight the best auto ads worldwide in five categories: broadcast TV, online video, interactive, experiential advertising, and print and outdoor. The One Club received submissions from 16 countries. The winners are from Sweden, Australia, China, France and the U.S.

Audi of America won for its ad "The Scripted Life," by AOR Venables Bell and Partners, a metaphorical story in which a guy wanders through his life reading from a script, and where every other person has their own scripts, and where every interaction is read as if the participants were actors. Until an Audi A4 shows up. The guy tosses away his script and takes off.

Hyundai Motor America won for its ad, via Innocean U.S.A., touting impending-collision avoidance technology: a dad saves his kid from physical disasters as his son grows up, and the car does it for him.

In the Australian market, Toyota won for a humorous ad for the Hilux pickup truck that parodies ads that show trucks being torture-tested. Instead, it’s the potential Hilux owners being rigorously, even brutally, tested to see if they have what it takes to own one. The spot is via AOR Saatchi & Saatchi's Australia unit.

For online video, Volvo trucks won with “The Epic Split,” via Forsman & Bodenfors, where actor and martial arts icon Jean Claude Van Damme demonstrates Volvo’s dynamic steering by doing a split between two trucks. Honda's “The Other Side”, via Wieden+Kennedy, won for interactive advertising. For the top experiential ad, Volkswagen's "Eyes on the Road" by Ogilvy Beijing won. The in-theatre campaign had movie audiences watching an in-car video showing the view through the windscreen as the driver cruises down a country road. At that point a team hidden in the back delivers everyone in the theatre a text message. When the check their phones the car onscreen crashes. The message: don't text and drive.

Jeep's “Upside Down” by Leo Burnett France won for top outdoor ad. The rankings are derived from online votes by a jury of ad industry professionals and some auto industry journalists. The awards will be presented at an AOL Autoblog event on Jan. 13 in Cobo Hall at the auto show.