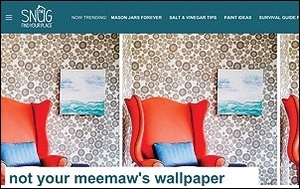 Time Inc. is making another big investment in digital media with the launch of The Snug, a Web site targeting millennials with do-it-yourself, crafting and décor content aggregated from Time Inc. publications, as well as dozens of partners, with an eye to distribution across social platforms.

The site, developed with a publishing platform created by RebelMouse, is optimized for mobile consumption, social sharing, and native advertising.

The Snug will bring together DIY and décor content from Time Inc. properties, including InStyle, People, Real Simple, Southern Living and This Old House, as well as partners like Apartment Therapy, CasaSugar and HomeTalk. The site will launch with syndicated content, but also plans to introduce original content, including video, in the near future.

The Snug debuts with support from launch sponsor IKEA U.S., as part of a deal giving IKEA exclusive native advertising placements on the site for six months. IKEA U.S. external media solutions manager Alia Kemet stated:” Sponsoring the launch of The Snug aligns closely with our vision to provide a better everyday life at home. Many of our customers are natural DIY-ers and this unique platform allows us to reach and inspire them in a new way.”

Following its spinoff from parent company Time Warner last year, Time Inc. has moved swiftly to bolster its digital media offerings and so strengthen its connection to the Millennial audience.

Last month, the publisher unveiled a a new strategic partnership with technology firm IFTTT (which stands for “if this then that”) with the goal of boosting cross-channel distribution of its digital content. The new service, called Channels on IFTTT, allows consumers to access, share and store content from Time Inc. magazines across a wide range of apps and devices, including Twitter, Tumblr, Evernote, Pocket, iOS and Android, while preserving the provenance of each piece of content.