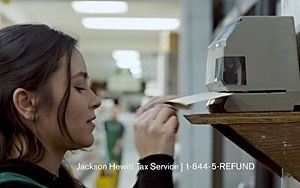 The mantra, “Working Hard for the Hardest Working,” guarantees that the company will deliver the biggest tax refund with 100% accuracy.

CEO David Prokupek said the aim is to let customers know they can depend on the company’s expertise.

“Our new brand promise conveys our commitment to the customer,” Prokupek tells Marketing Daily. “We want our clients to know they have a partner in Jackson Hewitt, a partner they can count on.”

From juggling careers and raising children to caring for aging parents, consumers are being constantly challenged to do more with less, Prokupek says.

“They need someone on their side -- a tax and financial advocate to fight for them,” he says. “We fight to get our customers 100% of their hard-earned money.”

The target is “hard-working Americans,” from single moms, students, and busy families raising kids to individuals taking care of their parents and those working multiple jobs.

“There is no specific age or demographic,” Prokupek says. “Everyone has to file taxes, and our campaign shows how our brand makes tax season easier for them.”

The promise to work hard has always been integral to the Jackson Hewitt brand, he says.

“This year, we decided to put our pledge on every desk so clients know we pledge to treat every single tax return like it is our own,” he says. “The Jackson Hewitt brand promise is now visible in every location.”

In addition to the guarantee to get clients the biggest tax refunds, Jackson Hewitt is also giving customers a $50 Walmart eGift Card, which is available instantly when taxes are e-filed with Jackson Hewitt. The Walmart eGift Card will be offered until March 31, and can be used on anything from groceries to tires, in stores or online.

Jackson Hewitt services are available in more than 6,300 Jackson Hewitt locations throughout the United States -- including nearly 3,000 Walmart stores, up 300 from last year.