Spark, Delta Climb Up To The Animal Planet Treehouse 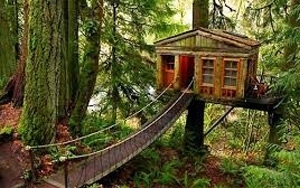 Pity those whose treehouses are just boards and branches. Delta Faucet Company is sponsoring Animal Planet's Treehouse Masters series by awarding one winner the Ultimate Treehouse complete with a fully functional kitchen and bathroom.

The multifaceted brand integration, which was a collaboration between Animal Planet marketing, Discovery Communications ad sales marketing and Spark, transforms a standard sweepstakes platform into a custom, content driven contest and builds upon Delta’s larger “HappiMess” campaign which launched in August 2014. This campaign is a continuation of the company's message that getting clean is almost as much fun as getting messy, whether it is from backyard gardening, family meal -- or now, living in a treehouse.

"One thing that is interesting about this campaign is its collaborative nature," says Eric Levin, LiquidThread. "Unlike many off-shelf opportunities that you usually find working with [cable networks], we worked with Animal Planet from the beginning on the execution so they listened to what we needed and helped us to lay out plans."

Similar to the earlier HappiMess efforts, the sweepstakes is designed to be highly interactive and engaging. First, the campaign sought video submissions that explained what their Ultimate Treehouse would include, and what hobby or activity they would like to bring to life in the trees.

The entry process- open between December 22 and January 11 - attracted more than 2,700 entries. "And we were asking for user-generated content, not just survey answers, so these results illustrate that people want to participate in this platform," says Bonnie Dombrowski, media supervisor, Spark. "What is great about this campaign is that it is providing people with a space to fulfill their passion. It is asking them what they want to do in the treehouse."

Then, between January 16 and 25, viewers will vote for their favorites that best embody the HappiMess spirit.

Finally, the Ultimate Treehouse -- constructed by the show's architect Pete Nelson -- will be revealed during the season finale of the series on April 17th. This winning design will be inspired by the winner’s own HappiMess hobby/activity, and feature Delta kitchen and bathroom products to help clean up all of those treehouse messes.

This contest is supported with on-air and digital support. Two custom vignettes air on Animal Planet to raise awareness of the promotion and there was a passive production integration during the Treehouse Masters Holiday Special. There are also in-program mentions and bumps to drive entry submission and voting.

Timing was a challenge with all of these various components. "Even though we got started early in the execution, timing is critical to have the content prepared for the rollout. We worked hand-in-hand with Animal Planet," says Levin.

Still, this brand integration may seem unlikely considering that Delta Faucets aren't typically found in treehouses, but Spark's Levin says this deal illustrates the brand's willingness to explore new opportunities. ""I have to give them credit for their willingness to try new things. It is a great fit because it allows them to elevate their product to a new level," both figuratively and literally.