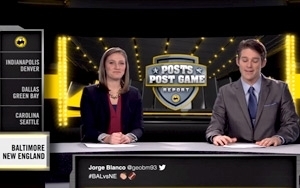 Social media has changed the way we watch sports. One eye is on the game, the other is on Twitter, reading commentary from other fans. As a place where sports fans gather, Buffalo Wild Wings is turning those moment-by-moment comments into full-game recaps.

Through the end of the NFL season (including the Super Bowl), Buffalo Wild Wings is highlighting some of its fans’ game recap tweets for an online program, “Buffalo Wild Wings Posts Post Game Report.” Taking an ESPN-like approach, the show features two anchors reporting on the games entirely scripted by tweets. The tagline for the show: “Yesterday’s game-time tweets, today.”

The videos are inspired by Buffalo Wild Wings’ own experience during the Super Bowl last year, when the brand — whose advertising featured a special “overtime” button to send close games into extra time so fans watching could extend their good times — noted it couldn’t even make the Seahawks’ 43-8 blowout of the Denver Broncos close, Ruhland says. The positive response to that tweet revealed a path in which the brand could be part of the game, without having to cut through the noise of (or spend the money on) traditional Super Bowl advertising.

“What we were intrigued with is that we were part of the chatter simply by saying, ‘We don’t have a button for that,’” Ruhland says. “You can affect these moments that matter.”

In the video following the AFC and NFC divisional playoffs, the two anchors (a man and a woman) recapped the four games by reading tweets that showed a game’s progress verbatim, including describing emojis (like praying hands) and typos. Recaps will run Monday, Jan. 19, and Monday, Feb. 2, following the NFC and AFC championships and the Super Bowl on Buffalo Wild Wings’ social media channels. They will also run on the WingTV network that is in-place in a limited number of restaurants. The brand is encouraging fan participation by encouraging them to use the hashtag, #BWWPostGame.

Though targeted as football-season ending effort, Ruhland left open the possibility of extending the program to other sports and other seasons. “We look at the Super Bowl as this great incubator,” Ruhland says. “We feel we can take this idea and build that into [other sporting events].”