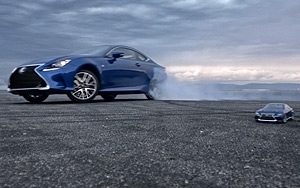 No doubt the licensing and intellectual property world of automotive marketing is important for products and brands. Especially with scale model cars. But would you put one in a national spot as a proxy for the real thing? A national ad to run before the Super Bowl?

No, not normally. The water flows one way in the river from product to model. But Lexus is going the other way in a series of videos it launched last week with remote-control stunt specialist Drift44, to tout its Lexus RC F performance car.

Lexus, which has pretty much done a 180-degree fishtail with its brand identity to focus on performance and handling characteristics — Lexus as a driver's car — has turned one of the videos into a TV spot, via Lexus AOR Team One. The ad is, in fact, slated for pre-game programming of the Super Bowl. The automaker says its decision is based on responses to the online videos. Then, late on Friday, when another advertiser backed out, Lexus bought time in the third quarter of the game.

The social videos, on Lexus.com/letsplay, feature a 1/10-scale remote-control version of the RC F coupe. The car does the kind of hard-to-believe drifting stunts typical of Ken Block's Gymkhana auto acrobatics videos, involving jumps, hurdles, and smoke-spewing drift spins around obstacles and people.

In the TV spot we see the scale model doing its thing first, and then a real RC F 350 — same color scheme — drifting into the frame, mirroring what the little car is doing. The spot directs viewers to visit the video site to watch the rest of the series showing the little car parallel parking, bowling, and lighting a match (that is attached to its bumper) by drifting past a rough wall.

Brian Smith, VP marketing at Lexus, tells Marketing Daily that the impromptu decision to create the spot was made last Friday evening, based on the response to the videos. "Only five days passed from buying off on the idea to delivering to the network. Lexus already had pre-game pods purchased, and decided to create a brand-new spot based on the success of the social campaign."

He says the company had started off with a plan to use remote-control cars as a hook to talk about the RC F, and had commissioned remote-controlled versions of the car to celebrate its launch. "Lexus has a growing and dedicated social media audience that loves to interact with the brand," he says. "When we discovered the amazing work of remote-control expert Drift44 online, we couldn’t resist bringing the two together." The company, says Smith, plans to release a few more of the videos in coming days.

Lexus, which launched the RC car at the Detroit Auto Show last year, is positioning it against BMW's new 4-Series M performance coupe, and the Audi's RS5 performance car, principally, although Jaguar is in the mix. Lexus has also been running online videos featuring driver Justin Bell testing the three cars under the aegis of AMCI Testing. And Lexus kicked off RC advertising with an ad called "Face Off" featuring actor Wes Bentley of "The Hunger Games."