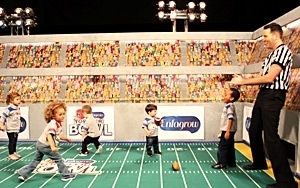 "Families have long been at the heart of TLC, and few things bring them together like the Big Game," says Nancy Daniels, General Manager, TLC. "Now, TLC is getting in on the action with one of the most entertaining showdowns on television — where tears from losing players will actually be age-appropriate."

Known as the Enfagrow Toddler Bowl, the event is sponsored by Mead Johnson in order to promote its nutritional drink for toddlers. "Enfagrow is a nutritional drink designed to help nourish healthy brain development during the toddler years," says Leslie Lee, associate director of marketing for Enfagrow. "We were happy to sponsor a program that showcases both mental and physical challenges for toddlers."

The event pits 30 toddlers ages one through three against each other as they participate in a series of physical challenges and brain-boosting games. These activities, including a 4-Yard Dash, Quarterback Challenge, Speed Sorting, Touchdown Dance-off and the Bubble Break, are all designed to represent crucial learning and growth development stages.

YouTube personality Clintus McGintus serves as the referee, guiding the players through their various contests.

The partnership, negotiated by Publicis Groupe’s Spark Communications, extends beyond the core event to additional on-air and digital elements. With Enfagrow’s input, the channel involved created custom tune-ins, which will air prior to the show, featuring the toddlers' pre-game rituals and chats with their 'coaches' before the big match. There will also be on air vignettes featuring the game “highlights,” immediately following the bowl. In addition, viewers are able to visit TLC.com for a photo gallery of the toddlers in competition mode.

"Our goal was to create a way to showcase Enfagrow products in a meaningful, entertaining and educational way," says John Muszynski, Chief Investment Officer, Spark. "Given the timing of our flight, we agreed alignment with alternate game-day programming would be a perfect way to amplify the Enfagrow brand."

Casting directors specifically looked for boys and girls who were energetic, active and playful. And although there were 30 players in total, nap time cut the field down to 15 toddlers competing at any given time.

Tracking toddlers wasn't the most difficult aspect of the program. "Far and away the biggest challenge behind the Toddler Bowl was time," says Muszynski. "We brought the entire Toddler Bowl from initial idea to execution in just over six weeks—a Herculean task to create an entire program." Spark has served as the media agency for Mead Johnson for five years.

This partnership with TLC, Discovery Life Channel and Discovery Family Channel illustrates the renewed focus Mead Johnson is placing behind its brands. Last year, the company increased its ad budget by $50 million, on top of its record $645 million spend in 2013. That was up 17% from $552.8 million in 2012, according to company financial filings. Sales of Enfagrow grew by more than 20% in 2014 in both the United States and Canada, the company reported.