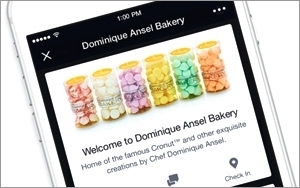 Starting in and around New York City, “Place tips” seeks to serve up “fun, useful and relevant info about the place you’re at,” Mike LeBeau, a product manager at Facebook, explains in a new blog post.

If users choose to view a particular place tip, they will gain access to posts and photos that friends have shared about that place, along with general information, including a place’s official Page, popular items sold at said place and upcoming events.

If well received by users, Place tips could challenge local ratings services like Yelp, Foursquare and similar offerings from Google.

Shortly, Facebook users can expect a tip or two when they come close to Central Park, the Brooklyn Bridge, Times Square, the Statue of Liberty and JFK Airport.

The feature requires that users first allow Facebook to track their geographic whereabouts. Even then, the social giant assures that users can opt-in to the updates whenever they choose. Users’ locations are determined using cellular networks, Wi-Fi, GPS, and, in some cases, Bluetooth beacons.

Prior to the launch of Place tips, Facebook was already exploring local listings. Late last year, for instance, it quietly relaunched its Places Directory, which is essentially a local search engine. Users can use the directory find a “place” by location or another place name.

Indeed, the promise of location-based social networking has never been brighter. By 2016, 90% of smartphones will be enabled with GPS technology, and as a result, the global, real-time, mobile location-based advertising and marketing market is expected to reach $9 billion by 2017.

Yelp, the sector’s undisputed leader, continues to clean up. While reporting a weaker-than-expected outlook for the fourth quarter, the public company boasted $102 million in revenue in the third quarter, representing a 67% increase year-over-year.

Looking to expand its own location-based efforts, Twitter is reportedly planning to partner up with Foursquare in the New Year. As sources recently told Business Insider, the microblogging giant thinks Foursquare can help it surface more geographically relevant information for users.