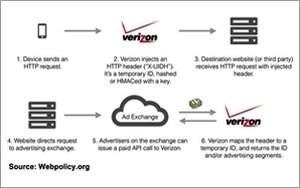 Faced with pressure from lawmakers, Verizon said on Friday that it will allow its mobile customers to opt out of a controversial tracking program.

The move means that Verizon's customers will be able to direct the company to stop inserting tracking headers -- known as UIDHs -- into their mobile traffic.

Verizon used the UIDHs to track people's activity online and send them targeted ads. In the past, the company allowed people to opt out of receiving targeted ads powered by its own ad program -- Precision Marketing Insights -- but didn't allow them to opt out of header insertions.

Privacy advocates warned last year that outside companies would be able to draw on the headers in order to compile profiles of users, but Verizon dismissed those concerns as unlikely.

Despite Verizon's predictions, it emerged two weeks ago that the ad company Turn was using the UIDHs to track people for behavioral advertising purposes. Even when users deleted their cookies, Turn was able to use the UIDH to recreate those deleted files, according to research published in January by Stanford's Jonathan Mayer. Turn subsequently said it would stop using the UIDH for ad-targeting.

Verizon said in a statement on Friday that the company expects the new opt-out function to be available soon. “We listen to our customers and provide them the ability to opt out of our advertising programs,” the spokesperson stated. “We have begun working to expand the opt-out to include the identifier referred to as the UIDH.”

The telecom's move came one day after four Democratic Senators expressed concerns about the privacy concerns raised by Mayer's report.

Among other issues, they said they intended to press Verizon for answers about when it learned that Turn used the header for tracking purposes, and whether any other ad companies are doing the same.