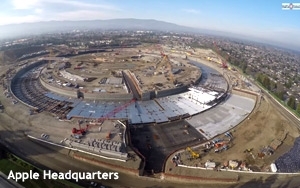 Without a viable Web search engine to call its own, Apple has become the first company to reach a market value of $700 billion, closing out Tuesday at $710.7 billion -- more than twice as valuable as Microsoft. The landmark comes just two weeks after Apple posted the largest quarterly net income of any public company in history, per reports.

Apple chief executive Tim Cook, speaking at the Goldman Sachs Technology & Internet Conference, said Apple will launch a new energy project by partnering with First Solar, which will build the 1,300-acre project in Monterey, on an $850 million solar farm in California, scheduled for completion in 2016. The farm will power Apple's new corporate headquarters. Construction was approved last year for Apple's multimillion-dollar project.

Apple agreed to a 25-year contract with First Solar, making it the solar industry’s largest commercial power deal, according to First Solar.

From his YouTube page, Jacob Mcminn gives us an aerial view of Apple's new headquarters from the sky. The video shot in August 2014 from a GoPro provides an overhead view of the property.

The solar farm will generate enough power to supply electricity for 60,000 California homes. For Apple, it will provide enough renewable energy to power the new Apple campus, all its California offices, 52 retail stores, and the data center in Newark.

As for search, Apple is looking for an engineering project manager for a project it calls Apple Search. Most of the reports suggest the company is looking to build a Web search engine, but the requirements seem too elementary. Many forget that Apple also supports search in apps and services like iTunes. The job description describes someone who can manage backend operations projects for a search platform supporting hundreds of millions of users.

"Product search relevance engineer" would better describe someone who would work on a Web search engine. The qualifications require more than five years experience writing in Perl, Python, Java, or C++. This job description specifically mentions Spotlight, and Safari on iOS and OS X. Or this one requiring someone who can work in Apple's Internet Software & Services organization, The senior search relevance engineer will play a "central role in the delivery of Big Data, Machine Learning & Search based Internet services."