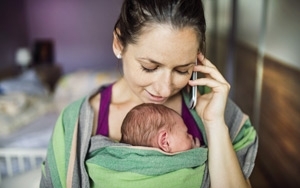 New motherhood brings with it many changes, including many when it comes to brand loyalty. But marketers wishing to capitalize on these potential new customers need to be sure they’re deep into mobile.

According to a recent study from the Interactive Advertising Bureau (IAB) and BabyCenter, 90% of moms between 18 and 32 years old own smartphones, up from 65% in 2012. In fact, ownership of smartphones among this group in the U.S. has outpaced ownership of laptop and desktop computers for the first time, and usage is up as well: these users spent 35% more time online via their smartphones rather than via laptops and desktops.

“As marketers think about reaching new moms, mobile has to be a benchmark or a central part of [their plans],” Joe Laszlo, senior director of the IAB’s Mobile Marketing Center of Excellence, tells Marketing Daily. “Too often mobile ad campaigns tend to be cut-down television campaigns or cut-down rich-media campaigns.”

The increased adoption of mobile has also led to increased time with media overall. According to the study, Millennial moms spent 8.9 hours a day consuming various media, compared with 8.3 hours in 2013. Mobile video watching even surpassed the television (2.8 hours on mobile, compared with 2.3 hours on TV).

“[The findings] speak to the centrality and convenience of mobile phones to moms and the increasing perception that anything you’d want to do on a laptop can be done on a smartphone,” Laszlo says.

Meanwhile, new motherhood opens up a range of priorities, raising the potential for brand movement in a variety of categories from food and beverage and cleaning products to financial services, fashion and consumer electronics.

“The significant event of becoming a parent resets a lot of parameters when it comes to brand choices. It's an inflection point in a mom’s life when there’s an opportunity,” Laszlo says.