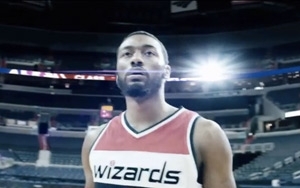 All-Star Weekend is about shoes, with Jordan, Adidas, and Under Armour each launching products and making noise around the big New York courts.

Adidas is using the weekend to launch a campaign centering on a series of films featuring NBA, NFL and pro soccer athletes DeMarco Murray, Jimmy Graham, John Wall, Joakim Noah, Damian Lillard, Derrick Rose, Sammy Watkins and Andrew Wiggins. The goal is, per the company, a long-term investment in sports and growing its North American business.

The theme is that in sports, yesterday's screwup or success doesn't matter, because anything can happen today. Clips of the above football, soccer and basketball athletes run as voiceover admonishes athletes to "Take It" in the here and now of today's match.

Said Mark King, Adidas Group North America president, in a statement: “We’re rewriting our playbook to regain relevance with the American athlete. We are signing the best athletes across key sports, partnering with top colleges and leagues and bringing innovative product to market.” He said that the campaign “allows us to have a sustained conversation with athletes year round using some of the best names in sports. We are in the midst of our most aggressive effort to drive growth in the U.S.”

Adidas recently signed deals with the University of Miami and Arizona State, and in January launched its Ultra Boost running shoe. The company said that last week it dangled Porsche 911 Carrera sports cars to the three fastest prospects who sign with Adidas prior to running their official 40-yard dashes later this month. And that, for the All-Star event in New York, the brand is the official uniform, and signature footwear for John Wall and Damian Lillard. Adidas is also promoting its Pharrell Williams label, X Adidas Originals Superstar, and its Kanye West-inspired Yeezy Boost.

Nike is also in the Big Apple on All-Star Weekend to celebrate its Jordan brand's 30th anniversary. To note the occasion and the weekend, the company has a presence at Pearl Pavilion across from Penn Station.