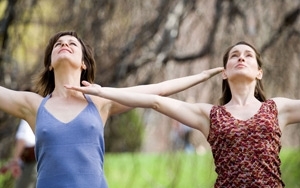 What does Gen Y really want, in addition to the latest smartphones and all the tech they can handle? Balance, a break from their phones, and escape from technology. Those are among the findings of Mindful Millennials, a new survey from digital health and wellness media platform MindBodyGreen.

“This is a group of people who are highly stressed out, and live and work in very competitive environments,” says Jason Wachob, CEO and co-founder of the site, which attracts about 15 million unique visits per month. “We’ve known that the line ‘Balance is the new achievement’ rings true with them for some time, but the intensity of that sentiment was surprising — 99% of our respondents agree with the statement that ‘more and more, I’m trying to find balance in my life.’” And 95% are increasingly focused on managing or minimizing stress he says.

A big part of this idea of balance as a status symbol is that “no Millennials seem to define themselves [only] by their day job,” he says. “They say things like, “I’m an accountant, I have a blog, and I make my own beer.’”

The trend, which explains why so many Millennials want to come across as well-written Twitter bios, is part of what Wachob sees as the generation’s inherent “modern spiritualism.” While 90% say they see themselves as more spiritual than religious, they’re pushing away from the traditions of older generations. “And what’s interesting is that it seems to be more proactive rather than reactive,” he says. “Rather than waiting to start a family and then noticing how out of balance their lives are, they want to do something about it now.”

And the are bringing that mindfulness to bear not just on wellness, but also on career (almost half would take a 15% pay cut, for example, if it meant they could have a job with either social or environmental impact) and shopping choices. Brands like Warby-Parker and Toms Shoes, which make significant donations to charity, continue to be among their favorites, he says.

Equally intriguing, adds Will Palley, head of strategy and insights, “is their love/hate relationship with tech. They say they can’t live without their smartphones, and yet they are overwhelmed by social media. We estimate they spend a quarter of their waking hours on social media. It’s an overwhelming amount of communication.”

As a result, he says, “we see them doing things like playing “Phone Stack,” a game where people pile up their phones in bars and restaurants. The first one to touch theirs has to buy the next round. We are so eager to limit the presence of technology in our lives that we’re looking for strategies that force us to disconnect.”