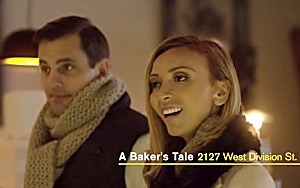 In 2013, YP launched the "YP: The New Way To Do" campaign to promote its name change from YellowPages.com to YP after its spinoff from AT&T. Then last year, the brand introduced a new brand promise with "YP Can Do That."

The foundation of YP’s new social marketing campaign is a documentary video series, shot by filmmaker Christian Sorenson Hansen, that profiles celebrity influencers as they visit the local businesses they use, need and love.

These short videos are complemented with the featured collection via MyBooks on YP.com that showcase the influencers’ favorite businesses.

Each month, YP will release one new celebrity short, with the Rancic's local story serving as the inaugural video on the YP microsite.

These personalities were selected because of their appeal to and influence on the audience YP hopes to reach—so-called "do-ers," who over-index in sports, entertainment, music and food, say executives.
At the same time, the campaign showcases locally sourced editorial content created by regional influencers.

Similar to the national celebrities, these individuals were selected based on their expertise and following within specific categories.

Finally, as part of the "Make Everyday Local" campaign, YP is hosting monthly VIP meet-ups that celebrate and showcase unique small businesses. The first will kick off in Atlanta, with NY and LA to follow. These are one-of-a-kind exclusive experiences with a local business such as a chef’s table experience, meet the tailor at a local retailer, or extended shopping hours at distinctive stores.

Since "Make Every Day Local" is not a branding campaign, the initiative is heavily focused on driving social-media chatter. Therefore, in order to encourage organic discovery, YP will launch the video content on the YP YouTube channel, Twitter (@yp) will use hashtag #makeeverydaylocal and Facebook will feature promotion for the videos and additional promotion of featured collection mybooks from influencers in key markets.

In addition, consumers will be encouraged to share their favorite businesses in their hometowns and favorite cities.

YP is also teaming up with Insightpool to help reach out to local social influencers to support the promotion of the video and content, in addition to promoting the series on YP.com.

"Our goal for this campaign is to move the needle on consumer engagement, we’ll be looking closely at mybook creations, user registration, and social sharing," says Checchi.

YP’s flagship consumer brands -- YPSM app and YP.com -- attracts more than 80 million visitors each month in the U.S. The previous two-year brand campaign resulted in a 24% improvement of unaided awareness.