Radio Groups Work To Free FM From Your Phone 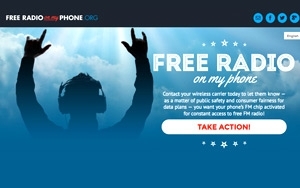 Didn’t know your smartphone could be a radio? You will soon.

NextRadio and the National Association of Broadcasters are launching a new awareness campaign designed to educate consumers about the existence of a chip inside of all smartphones that will allow the reception of local FM radio stations. The campaign, which launches this week, relies heavily on pro bono radio advertising to encourage wireless carriers into unlocking this feature on all smartphones.

“We know in the rest of the world, when this is turned on, people listen,” Jeff Smulyan, CEO of Emmis Communications (and spokesperson for the effort), tells Marketing Daily. “Most people just don’t know about it yet. Our job is to let them know it exists.”

The feature is currently available on all Android-powered smartphones from Sprint (and select phones on other carriers), Smulyan says. For those who already have the chip unlocked, the free NextRadio app activates the dormant chip and allows consumers to listen to over-the-air radio without tapping into their data plans. The app was also designed to employ the smartphone’s connectivity, showcasing song details, album and song purchase opportunities from its interface and one-touch access to radio station promotions, Smulyan says.

However, awareness and adoption of the feature is low, and three of the big four carriers don’t promote the chip’s existence, Smulyan says. Thus the awareness campaign. Spots take a humorous approach, with one commercial having the diminutive voice of FM chip interrupting a romantic dinner begging to be set free. “[Wireless companies] want you to pay for streaming music, rather than letting you listen to it for free,” the chip says. An announcer notes its time to start listen to free radio “rather than choppy, buffered radio that eats up your data plan and eats up your battery,” and encourages consumers to head to the site, freeradioonmyphone.org for more information. (Other spots feature former CHiPs star Erik Estrada, songs from Imagine Dragons and Lynyrd Skynyrd being rudely interrupted, and an account of a tsunami approaching American Samoa in 2009 to highlight how radio can be used for emergencies when the data network goes down.)

The groups are hoping to have the spots run 20 times per station per week between 6 a.m. and midnight to get consumers motivated to create change. “If we tell our 275 million weekly listeners about this, it should get a good response,” Smulyan says.

While the campaign is currently limited to radio (and some print), there is a possibility that it could go broader, Smulyan says. So far, however, simply promoting the ability of turning smartphones into FM receivers has significant resonance among consumers.

“We’d like every smartphone in the U.S. to have a radio turned on,” Smulyan says. “It’s starting to get a lot of traction already and we haven’t even publicized it yet.”