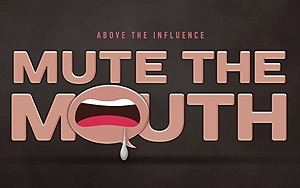 Ten years ago, the Partnership for Drug-Free Kids and its agency Atmosphere Proximity launched the “Above the Influence” campaign to differentiate from other anti-drug initiatives by positioning the social pressures to experiment with drugs as the enemy—not the drug itself.

"Teens are going to rebel," says Keith Ross, Creative Director, Atmosphere Proximity. "And instead of combating that with traditional anti-drug messages, we thought maybe it isn't about drugs. Maybe it is about pressure, so we decided to give teens self-confidence to make hard decisions."

Over its iterations, the campaign has reached an 80% brand awareness among teens, ranking near Apple, Coca-Cola and Burger King and its Facebook community includes more than 1.8 million.

Now, the organization and Atmosphere Proximity are introducing the latest phase with “Mute the Mouth,” a game designed to help teens shut down bad influences without saying a word.  "Teens are online and [The Partnership] is a non-profit so there's not a lot of money for this," says Ross. "Facebook is a wonderful way to activate this audience."

It’s a first-of-its-kind Facebook game that uses gesture recognition technology to accurately detect and measure teen expressions. During play, teens are pestered with dumb ideas. The sooner they make the correct shut-it-down face the faster they move on to the next round. In the end, every player will earn a badge with social credentials like “Big-League-Drivel-Zipper” or “Master-Muzzle-Muter” so their network will know whom they’re dealing with.

The game's ability to recognize faces and movements is expected to act as a key lure to attract teens. "I really think this new technology is going to blow up the advertising industry," says Ross.

This game will be promoted via traditional TV spots as well as extensive digital and social outreach, including Facebook and Tumblr. However, Twitter is not on the media strategy. "This age group is not using Twitter, but they are migrating to Tumblr so we have big plans [to reach them there]," says Ross.

Indeed, the campaign is strategically designed to adjust to shifting teen preferences. Today, it may be Facebook, but tomorrow, it is another platform. "There's no one silver bullet to reach all teens so we keep reinterpreting with different influences to hit teens that maybe we didn't tap last time. Next time we will do something completely different. We erase our minds and start fresh," says Ross.

The Partnership spent $1.185 million on this program in 2013, according to its most recent financial figures. However, the organization's structure is designed to maximize its impact by doing more with less. To that end, it leveraged a $9 million operating budget into $76 million of contributed services, media time and space. For instance, the Partnership Attitude Tracking Study (PATS) generated more than 680 media stories, including coverage by The Washington Post, NPR and the Associated Press, which garnered more than 100 million impressions.