Piper Knows What Goes On In The Dark 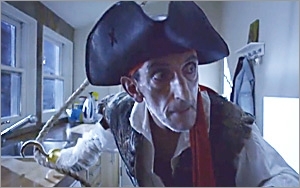 Security and home protection company iControl knows what goes on in the dark. But don’t worry, it’s not (necessarily) as nefarious or personal as one might think.

In its first consumer-oriented campaign for its new Piper line of security cameras, the company uncovers the mystery of how one sock always seems to go missing and how people get morning breath.

In the case of the former, a woman who finds only one sock in her clean laundry pile accesses the Piper camera to reveal a one-legged pirate breaking into her home to steal one sock at a time. Continuing the nautical theme, the source of morning breath is revealed — via video streamed to a tablet — to be a trio of fishermen returned from the sea dumping a mix of seawater, old fish and crusty beard into an unsuspecting man’s mouth every night.

“Everyone has experienced a lost sock and morning breath, so it’s something everyone can relate to,” Kim Kline, partner and director of account management at Chemistry Club (the agency that developed the campaign), tells Marketing Daily. “It’s outlandish, but it’s done in a way that’s smart and quirky.”

“[The market] is incredibly fragmented,” Kline says. “It’s an opportunity for brands to step up and present themselves as something consumers can relate to.”

Paid media for the campaign will be primarily through social, with some pre-roll video. The company is taking a measured approach to the media rollout because the effort is truly the first for the brand aimed at the consumer market, Kline says. “It’s a bit of a trial,” she says. “We want to be smart about doing this correctly.”