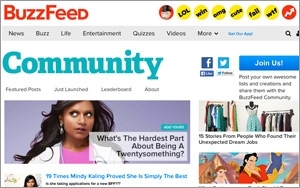 The free ride is over for brands on BuzzFeed.

The publisher has frozen all Community Brand Publisher accounts, Social Media & Marketing Daily has learned. Brands were made aware of the change in an email sent out earlier this week. A BuzzFeed representative confirmed the move on Thursday.

“BuzzFeed Community is implementing some new guidelines for brands, which will affect how you use your BuzzFeed account,” the email explains. “BuzzFeed Community has been evolving over many years, but in the last few months, that identity has begun to take shape as a place for individuals to share quizzes, lists and personal stories about their lives and the things they love.”

As such, BuzzFeed's Community team says it will now pounce on posts that try to sell something, have an overt political or commercial agenda, or appear to use BuzzFeed's brand as an implicit endorsement of a product or a political position.

In place of the Community accounts, BuzzFeed is now encouraging brands to buy advertising on its site.

For the sake of users and paying advertisers, cleaning up content is common for social networks and social-centric publishers like BuzzFeed. Pinterest, for instance, recently decided to remove affiliate links from its platform. The pin-based social network had been automatically removing such links for several years, but without an official policy.

In recent years, BuzzFeed has been on a mission to reposition itself as a more respectable news publisher, with clearer lines between editorial and advertising.

Last year, for instance, BuzzFeed CEO Jonah Peretti said he oversaw the deletion of thousands of posts, because they no longer met the publisher’s rising editorial standards.

As Peretti said at the time, BuzzFeed began -- and to some degree remains -- as a technology company with different standards than a traditional media publisher.

For now, Community Brand Publisher posts and accounts still exist and are viewable, although they can no longer be altered.