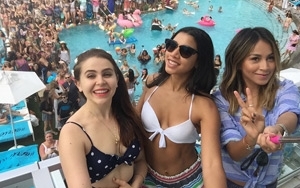 Add Aerie to the list of marketers looking for magic in “real women” photos. The teen retailer is launching what it calls the world’s largest selfie campaign, which it hopes can boost “body positivity” and sell more bikinis for spring break.

Aerie, owned by American Eagle Outfitters, kicked off the campaign on International Women’s Day with the “world's largest unretouched selfie,” shot by aerial photographer Gray Malin in Miami Beach. While it boasts a few celebrities, including Mae (“The Duff”) Whitman and DJ Hannah Bronfman, as well as Aerie models and some fashion bloggers, it’s mostly about real real women, with more than 1,000 joining in the  #AerieREAL “Love Your Real Selfie” effort.

The campaign comes at a time when American Eagle — like other leading teen chains — is struggling to connect with young women, with its comparable store-sales coming in flat in its most recent quarterly results. Its attempt to turn spring break’s usual raunchy, wet t-shirt and “Girls Gone Wild” image into a Dove, Pantene or Always-esque moment might change that.

"Aerie is seizing spring break as an opportunity to challenge beauty standards, share a brilliant swim collection designed for all Aerie girls and celebrate body-positivity with the world's largest selfie," says Jennifer Foyle, Aerie brand president, in its release.

There’s no arguing that women like such efforts. A SheKnows Fem-vertising survey, fielded last fall, finds that 52% of women say they’ve bought a product because they liked how the company presented women, and 92% could recall at least one such campaign. (Of those, 45% recalled sharing the ad with someone else.)

And while the idea may sound similar to others, the effort plays to Gen Y women’s decidedly different “fem-vertising” values, says Samantha Skey, chief revenue office for SheKnows Media, which owns BlogHer and StyleCaster. She tells Marketing Daily that while American women are increasingly interested in unretouched beauty, whether it’s Dove’s long-running Real Beauty campaign or the current relentless sharing of an undoctored Cindy Crawford picture, “with Millennials, something slightly different is going on. We find in our work with teens and young women that they experience social media as 'this is the real me,’” she says. “That’s why the #NoFilter hashtag is so popular with them.”

Inspired by such celebrities as Lena Dunham and Zoe Deschanel, she says Millennials and the Millennial Stem just behind them “are much more comfortable taking their own stand, and rebelling against any brand that makes them feel not good enough. And certainly, this generation is more aware than any before of how retouching and photoshopping works.”

Baby Boomer women are far more earnest and angsty in their response to such ads, while Gen X are “more defensive.” Gen Y, by comparison, is much more matter-of-fact about the pervasiveness of retouched photos. “There are still problems, like the prevalence of eating disorders and body image distortion, and we certainly haven’t fixed all that,” she says. “But these young women are, for the most part, very comfortable playing with images of themselves in social media. Their baggage is a lot lighter.”