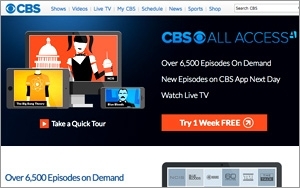 Although CBS’ Les Moonves isn’t saying exactly how many, CBS All Access -- its stand-alone digital cloud TV service -- has over 100,000 subscribers.

The president/CEO of CBS was responding to a question at an Deutsche Bank media conference on Wednesday -- with regard to Dish Network’s Sling TV, another stand-alone digital TV service, which also started up at the same time. Sling TV says it has around 100,000 subscribers.

At that rate of growth, analysts say CBS would be ahead of estimates.

CBS and its affiliate stations will soon secure a deal that enables them to provide live streaming of programming for CBS All Access. Stations will have a revenue-sharing arrangement for the $5.99 CBS All Access service. As part of the agreement, stations will be incentivized to promote it.

When asked about the weak TV advertising market, Moonves says the current scatter market is improving -- with CBS gaining 10% hikes on the cost per thousand viewers (CPMs) versus the upfront prices set last summer.

In addition, he notes CBS has seen sharply higher volume.