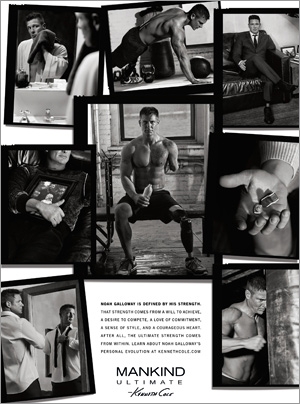 Kenneth Cole is launching a limited edition fragrance, and is using Noah Galloway — a 33-year-old double amputee — as its spokesman, appearing in print and digital ads.

Called Mankind Ultimate, the new fragrance is scheduled to be in stores next month. The company is also continuing its sponsorship of the Men’s Health contest that last year led to the Galloway’s “discovery,” and landed him on the cover of Men’s Health. And Galloway may be on the verge of even more attention, and is set to appear in the upcoming season of “Dancing with the Stars.”

While some might say Galloway — a veteran, personal trainer and motivational speaker — is an unlikely sex symbol, “we are hoping men and women alike react to Noah the way we did,” says Angela Budd, global VP of marketing for Parlux Ltd., Cole’s fragrance partner. “He is a real guy, and a great one at that. Loves his kids, loves his girlfriend, he's passionate about what he does and I think he's inspiring.”

Ads, produced by Cole’s in-house agency, use black-and-white photos to showcase aspects of his life, as well as his Men’s Health-worthy abs. The campaign is running in Men’s Health, as well as its website, and is timed to coincide with the just-begun second year of the search for the next “Ultimate Men’s Health Guy” contest.

Budd tells Marketing Daily that the scent is sexy, “bold and fresh with a woody undertone.” She says it was crafted in partnership with Givaudan, and perfumer Marypierre Julien, “who was able to capture the essence of Mankind,” adding a fresh, modern twist.

This year, rather than create a separate microsite for the “Ultimate Guy” contest, she says the brand is using a landing page on the Kenneth Cole Web site, as well as a Men’s Health contest page, and that there will also be a social campaign push for the #MankindUltimate hashtag.

The fragrance, at $72, is available in such department stores as Macy’s, Dillard’s, and Bon-Ton Stores, as well as Kenneth Cole stores and kennethcole.com,

Women’s Wear Daily reports that sales for the limited-run product could reach between $8 to $10 million.