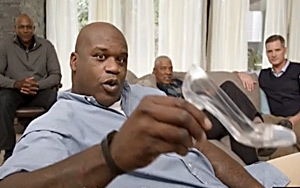 It takes a bit of toughness — some might call it “strength” — to become a sports legend. That strength is akin to building a strong nationwide wireless network, according to AT&T.

Timed to coincide with the NCAA Men’s Basketball tournament this week, AT&T has gathered a new group of “Legends” for a round of television advertising. This year’s crop includes Shaquille O’Neal, Christian Laettner, Julius Irving and Clyde Drexler, discussing what it means to be “strong” while watching the tournament on television. The former players were chosen for the way they exemplified strength during their playing days, says Valerie Vargas, vice president of advertising and communications for AT&T.

“The ads will all carry [our] ‘strong can’ theme reinforcing our ‘Nation’s Strongest LTE Signal’ claim,” Vargas tells Marketing Daily. “Similarly, fans will be following their brackets throughout the tournament in the hopes they have the strongest.”

In one spot, from agency BBDO, the men discuss the importance of strength as a factor in reaching the top of the NCAA Championship. “You can’t just reach the Sweet 16 and sit back and rest on your laurels,” says Laettner, who happens to be relaxing in a hammock made from nets he cut down over his college career. The irony of Laettner literally resting on his laurels is commented upon by Irving and O’Neal.

Other spots depict O’Neal giving advice about what to do when one’s favorite team gets eliminated from the tournament early (“Pack your bags and hop in Cinderella’s bandwagon,” he says before holding up a glass slipper and making horse clopping noises for a full 15 seconds), and Drexler performing arm curls with bracket weights to keep strong during the month-long tournament.

“We’ve learned that that audiences love seeing sports legends have a little fun together off the court, which lifts awareness of AT&T ads,” Vargas says. “The legends love doing these shoots together. They have a lot of fun on and off camera.”

Once the tournament begins, commentators Bill Rafferty, Kenny Smith, Reggie Miller and Grant Hill will appear in in-game spots along the same theme. The brand is also sponsoring exclusive court-side content, using Twitter to share real-time images with fans throughout the tournament. Last year, the brand’s courtside component drove 10% of the total March Madness Twitter engagement and gave AT&T the top “share of voice” during the tournament, according to the company.

“All of the coolest images from each day’s action will be available on Facebook, Twitter and Instagram, as well as ncaa.com/courtside,” Vargas says. “It was among the most-engaging social content during last year’s tournament.”