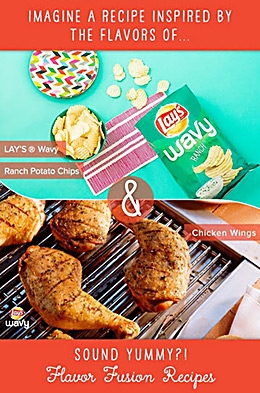 Lay’s Wavy, the ridged-cut potato chip brand from PepsiCo’s Frito-Lay division, has partnered with the DIY/e-commerce site Brit + Co to create what is being billed as the first Pinterest cookbook.

The cookbook, which will ultimately contain 40 recipes, is being put together in two phases, with the first 20 available for download in mid-May, and the others in the fall.

For the first phase, the brand has posted 50 pins (example shown above) to its “Lay’s Wavy Flavor Fusion Inspiration” Pinterest page. Each pin pairs one of the brand's five varieties with a popular food item, such as guacamole or salted caramel.

From March 19 through April 30, fans are being encouraged to "like" their favorite pairings. The 20 most-liked combinations will be used as the inspirations for recipes created by chef Stephanie Izard (winner of the fourth season of "Top Chef" and chef and partner in two award-winning Chicago restaurants, Girl & the Goat and Little Goat); Frito-Lay's executive chef, Jody Denton; and Brit + Co. Every recipe will include a flavor of Lay's Wavy chips, either as an ingredient or as an accompaniment.

By spotlighting the range of the brand's flavors, the cookbook's launch is in part designed to drive awareness of a new variety, Lay's Wavy Cheddar, which hit store shelves last month. That brings the number of flavors to five: The others are Original, Hickory BBQ, Ranch and Roasted Garlic & Sea Salt.

The cookbook, and the growing portfolio of flavors, are designed to engage Millennial women — the audience on which the 20-year-old Lay's Wavy brand has been strategically focused for about the past two years, Tina Mahal, senior director of marketing, Frito-Lay, tells Marketing Daily.

Pinterest is particularly popular among this consumer segment, of course. And with the social channel's first cookbook, "we’re not only giving our consumers an opportunity to discover new and unique dishes that celebrate our portfolio, we’re giving them a voice in which recipes we ultimately create,” Mahal says. The brand team worked with OMD to come up with the cookbook's concept.

Although she declines to discuss sales statistics, she reports that the brand has made definite progress in increasing penetration and reach frequency with the target audience.

Outside of the Lay's Wavy Pinterest channel, awareness of the cookbook project and the invitation to pick favorite pairings is being driven by promotion on the Brit + Co site — also a favorite of Millennial women, with its emphasis on creative, DIY twists on food, home decor, fashion and more — and its social channels.

Promotions will also be seen on the social channels of the Lay's parent brand, and chef Izard's.

The cookbook is also getting in-store support, including displays for the new cheddar flavor that drive grocery shoppers to the Lay's Wavy Pinterest page to participate, according to Mahal.