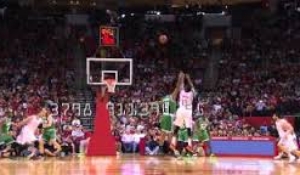 ican Express card is getting assists from top NBA players.

It focuses on bringing fans closer the game, and all elements of the campaign depict fans’ passion for their favorite teams. The commercials trade on fans' nostalgia for the game and the experiences it has given them, whether it’s past championships they enjoyed or the shots that electrified them.

The campaign extends to select NBA venues and to the bank’s branches via on-site display materials, including life-size images of the BBVA Compass brand ambassadors.

“To develop the campaign, we integrated feedback from NBA fans,” said BBVA Compass Chief Marketing and Client Experience Officer Jennifer K. Dominiquini, in a release. “Their insights were critical in helping us develop marketing elements, like the final commercial spots, to appeal to potential card customers. We also used social listening platforms to identify the key rewards that have the greatest appeal to fans.”

The card can be personalized with customers’ favorite team logos and is the first credit card to bear the global NBA brand. The card adds to BBVA Compass’ digital product portfolio and is expected to help the bank expand across the country by tapping into fans’ passions for the league and its 30 teams.

The card was designed with the NBA’s digitally savvy fan base in mind, Dominiquini says.

Among the card’s exclusive benefits is the NBA TripleDouble Rewards Program, which lets customers earn points redeemable for statement credits, NBA merchandise and exclusive NBA experiences from BBVA Compass and American Express. Fans also have an opportunity to gain double points for transactions at gas stations and supermarkets, triple points for qualifying NBA-related purchases and five times the points for card uses coinciding with NBA All-Star and the NBA Finals.

Points can be redeemed for NBA merchandise and unique perks, including meet-and-greets with top players, tickets to special games and behind-the-scenes experiences.