Starwood's W Hotels Hold 'Turn It Up For Change' Events 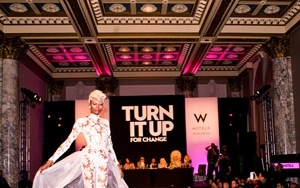 Starwood Hotels and Resorts is supporting the Human Rights Campaign with ongoing “Turn It Up for Change” events at W Hotel locations.

The campaign centers on monthly fundraising events. The brand has raised more than $100,000 at more than 30 music-oriented local events in the six months since its launch as well as major gatherings in Atlanta, Chicago, NYC and Los Angeles during Grammy’s week.

A portion of the proceeds from each event is donated to the HRC. The more states that commit to marriage equality, the more W Hotels will donate — one percent for every state that recognizes same-sex marriage.

The brand is promoting the events on social media sites with the hashtag #turnitupforchange.

“We have always been ‘out’ about our support of LGBT rights, and have long been known as a welcoming place for all,” Ingham tells Marketing Daily. “We have many guests and associates who are part of the LGBT community, and had welcomed them as part of our family before many of our competitors.”

Singer/actress Jennifer Hudson is the effort’s spokesperson. The Academy and Grammy Award winner has entertained audiences with performances and appearances at select events at W Hotels, and more are in the works.

Hotel guests at every U.S. property can book a Turn It Up For Change room package, which will come with a year-long HRC membership. For each package booked, W will donate $10 to the HRC.

The response to the events has been overwhelming, Ingham says.

“With the Supreme Court decision regarding gay marriage on the horizon, we are also planning a massive marriage equality celebration to take place in June should all go well,” Ingham says.

Equality has long been a core value at W, he adds.

“Our company grew up while LGBT rights were coming of age and now that we are at a civil rights ‘tipping point’, it's only natural that we should be louder about our commitment to these issues,” Ingham says. “It is up to us as an influential brand and as a leader in corporate diversity to take a strong stand and make a difference.”