Cheese: It's Not Just A Snack, It's A Culinary Adventure 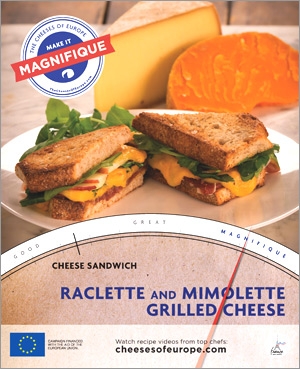 Last year, The Cheeses of Europe, a national initiative co-financed by the French Dairy Inter-Branch Organization (CNIEL) and the European Union launched the Make It Magnifique marketing campaign to create awareness about the variety of French cheeses available in the U.S.

It highlights how any recipe or occasion is improved by the addition of French cheese.

Now, the campaign is entering phase two that will emphasize the many ways that American consumers can incorporate French cheeses into their diets, recipes and lifestyles.

While the print, online advertising, pop-up stores and more than 1,000 in-store demos cover the entire United States, broadcast ads will air in Los Angeles and New York. That's due to what executives felt was the more developed nature of these “foodie” environments and their demand for higher quality cheese.

"Americans find some French cheeses hard to pronounce, they may not be familiar with the different varieties, and beyond serving them as an appetizer, may not think of the many ways French cheese can improve ordinary recipes," says Laurent Damiens, communications director at CNIEL, the French trade body for dairy products that oversees The Cheeses of Europe Marketing Council.

"Our campaign is designed to remind them of the extraordinary flavor and quality, of the different textures and varieties, and to show them different ways to use French cheese in their day-to-day lives. By adding French cheese to any recipe you Make it Magnifique," he adds.

There are slight changes between the initiative's first phase and its second roll-out, says Damiens. "In the first year, each of the TV commercials focused on an individual cheese and recipe, [such as] Mac & Mimolette, or Steak and Fourme d’Ambert.

"In 2015, we decided to create a new commercial highlighting multiple cheeses and recipes. The commercial features a confident young woman who, in the presence of ordinary food, shows how simple it is to change any dish or occasion from good to magnifique. We also produced the musical score which features the names of French cheese being sung."

CNIEL’s budget comes from membership fees paid by dairy producers and processors. In 2014, these dues amounted to $43.17 million (€40.2 million). In addition, French and European authorities provide subsidies for collective promotional campaigns, which was $11.28 million (€10.5 million) with $4.72 million (€4.4 million) co-financing in 2014.

Fifteen Degrees was awarded the business in December 2013 and launched the Make it Magnifique campaign in January 2014.