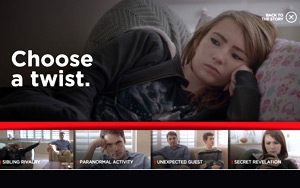 Online video advertising has become one of the hottest media on desktop and mobile, and Innovid plans to leverage that opportunity with a recently granted patent by The United States Patent and Trademark Office for its interactive video technology.

Innovid's patent No. 8,745,657 filed in 2009, describes a way for inserting interactive objects into video content. Even then, Tal Chalozin, Innovid CTO and co-founder, knew consumers would eventually take an active role in advertising.

Consumers increasingly want to participate in the storytelling, per Chalozin. "We want to combine the benefits of TV with online video to entertain consumers," he said. "It lets consumers pull up a chair and join in the conversation. We find allowing the consumers to interact increases the time they spend with the commercial by 34 seconds."

For Netflix, Innovid built a campaign to mimic a recommendation engine, giving the consumer the ability to choose their own adventure. Publicis Groupe-owned VivaKi inked a deal with the video tech company in January, making Innovid the agency's global preferred video advertising partner.

eMarketer forecasts marketers in the U.S. will spend $7.77 billion on digital video advertisements this year. Of that, mobile video will account for $2.62 billion.

Other numbers tell a similar story. Facebook's video advertising biz will earn around $3.8 billion in revenue by 2017, per research firm Nomura.

Innovid estimates its 2015 run rate at 100 billion U.S. impressions. Before receiving the patent, the company supported about 300 brands, more than 4,000 advanced creative video campaigns, and 110 platform clients whose video ad strategy is served by the company.