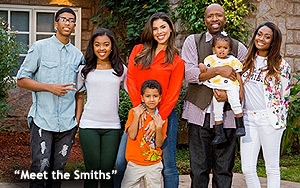 Turner Broadcasting and Samsung are taking their basketball relationship off the court and into reality programming with a new sponsorship deal of the new show, “Meet the Smiths.”

The reality program features “Inside the NBA” analyst Kenny Smith and his family. The deal will include sponsorship across multiple screens (including a digital-first show premier) on-air and online exclusive bonus scenes, and in-show brand integration.

“As an official NBA marketing partner and longtime advertiser with Turner, Samsung is a natural fit for ‘Meet the Smiths,’” Dan Riess, executive vice president of integrated marketing and branded content for Turner Broadcasting Ad Sales, tells Marketing Daily. “The new TBS unscripted series provides a great opportunity for Turner to extend our relationship with Samsung across our entertainment and sports divisions to tap into the power of our portfolio and deliver a new audience for our advertising partner.”

The show, which premiered last week, depicts Smith, his actress-model-singer wife, Gwendolyn Osborne-Smith, and five children, ranging in age from 2 to 21, going about their daily lives. Having already sponsored a sneak preview of the premiere on the network’s site and app, Samsung will also have season-long sponsorship of the show’s section on these destinations, which will also feature bonus content. Samsung’s products will also be showcased during several plot points of the show’s run, Riess says.

“For example, when Kenny is away for work in Atlanta on his anniversary, Gwen surprises him with a Samsung tablet in an effort to stay connected when physically apart,” he says. “Later in the episode while video-chatting on the tablet, Kenny surprises Gwen at the front door a day early, further advancing the episode’s theme of keeping the family together.”

Riess says he’s unconcerned with viewers feeling such integration is heavy-handed or distracting. “We’re careful to ensure any product references are both unobtrusive and relevant to the plot,” he says. “The partnership is manage through a collaboration between show producers and marketing executives, and the result is a natural incorporation of products and branding that is organic and does not interrupt the viewer experience.”