All Detergent Partners With Peanuts 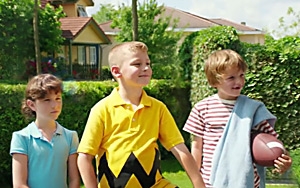 All Detergent is partnering with the Peanuts gang for a multi-year, integrated campaign.

“The Peanuts Movie” premieres Nov 6, which coincides with new product innovations from the All, including All Radiant, which restores whites and protects colors.

Demographically, the detergent brand and cartoon are well suited. All skews more toward households with kids than any other laundry brand, says Lora Van Velsor, vice president marketing for All, which is manufactured by The Sun Products Corp.

“We love the diversity of the Peanuts gang and we’ve got a product for all of them — be it All Oxi for Pig-Pen’s dirty messes, or All free clear to be sure Linus’s blanket is clean and soft against his sensitive skin,” Van Velsor says in a release.

In September, the partnership will kick into high gear during the promotion period before the movie’s release. Support includesa co-branded national television CGI spot, social, national print, retail activation and a national consumer promotion offering ticket discounts with purchase of participating All products.