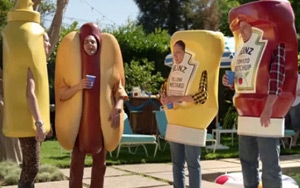 Heinz announced that it's taking a newly reformulated, "all natural" version of its yellow mustard into the mainstream retail arena, and supporting it with a major advertising campaign. Heinz said that this will represent its largest marketing investment since it was acquired by 3G Capital Partners LP and Berkshire Hathaway in 2013.

“Heinz is America’s Favorite Ketchup, and we’re aiming to become America’s favorite mustard, too," summed up Eduardo Luz, president of Heinz North America, in the announcement.

Heinz owns more than 60% of the U.S. ketchup market, but it has up to now sold its mustard largely through its foodservice business. French's, which is owned by Reckitt Benckiser Group PLC, says it had a 60% of the $400-million U.S. retail mustard market in the past 52 weeks, to Heinz's under 1%.

Heinz's yellow mustard initiative is one of the top "big bets" in product innovation that the company laid out to investors last month when it announced its deal to acquire Kraft Foods, points out Bloomberg News.

In addition to the category and brand synergy opportunities that the acquisition brings with it, Heinz appears to be responding to French's' incursion into ketchup territory.

French's fired the first round about three years ago, when it began selling its ketchup through its foodservice unit. It began selling the condiment at retail in Canada in December, and it's rolling it out to U.S. retailers nationwide this month, supported by its own national ad campaign, Elliott Penner, president of French’s, told Bloomberg.

The Heinz campaign, from the David agency, is themed “Ketchup’s Got a New Mustard.” The humorous creative takes the approach that "Heinz Ketchup has been with the wrong mustard for years, but finally found a mustard that lives up to its high standards of taste," noted Jessica Ryan, associate director of marketing, Heinz Brands at Heinz North America.

The TV commercials/videos use people dressed up as mustard and ketchup dispensers, with Heinz Ketchup upsetting his old (unlabeled) mustard girlfriend by announcing that he's taken up with a new squeeze: Heinz Yellow Mustard. The videos can all be viewed on YouTube.

Heinz described the campaign as an integrated, "360" campaign.