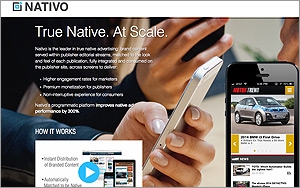 With more online advertisers including viewability in their demands for accountability from publishers and advertising technology firms, native ad platforms are hurrying to incorporate viewability guarantees into their offerings.

Most recently, Nativo announced it is partnering with Moat to guarantee 100% viewability for its brand advertisers. Moat will provide third-party verification that ads placed by Nativo are 100% visible.

The company is promising that 100% of native ads delivered through its platform will be viewable, meaning that all of the pixels in the ad will be in-screen for one continuous second. That is double the Media Rating Council’s standard for what constitutes a “viewable” ad, which calls for 50% of the ad’s pixels to be on screen for one continuous second.

Addressing the substantial differences between native and other types of online advertising, like display and video, Nativo has developed new viewability measurement techniques appropriate for native ad formats.

The new measurement techniques and viewability guarantees cover all the components that may appear in native ads, including headlines, preview images, and captions.

Nativo and Moat are also providing new engagement metrics and analytics, including tracking on scroll initiation and scroll depth, among other measures.

Also last year, native ad provider inPowered went beyond simple viewability guarantees by promising engagement for native ad content delivered with its platform. The inPowered platform, which creates native ads using editorial content from third-party publishers (review sites, enthusiast blogs, and the like), offers guaranteed engagement, defined as the proportion of viewers who clicked and spent at least 15 seconds or shared it online.

Advertisers don’t have to pay for any ad that doesn't meet this standard.