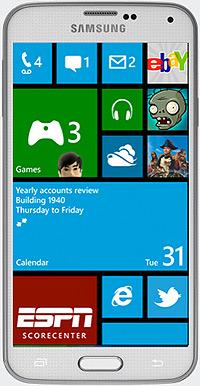 This means Microsoft's apps can act as a replacement for the ones Google releases on Android devices, like Gmail, Maps, Hangouts and more.

Microsoft's apps will be presented as an option, but the platform will allow the individual to use other available apps or uninstall them when needed unlike Apple, which requires some apps to stay on the phone.

For Microsoft, the deal familiarizes individuals who may not have tried Windows Phone-based apps in the past, possibly lure them away from the Android operating system. Microsoft won't need the hardware to succeed. Then there are cloud services.

Microsoft CEO Satya Nadella refocused the company to a mobile, cloud-first strategy. Using Microsoft apps will likely move them toward storing files in the cloud. Mobile services represent the largest growth area for many software companies.