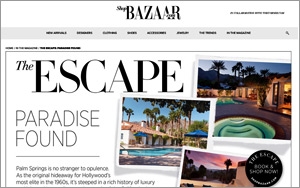 The yearlong campaign, kicking off this month, highlights Waldorf’s 26 hotel and resort properties in Harper’s Bazaar’s editorial pages and its Web site, including stories about fashion and travel inspired by Waldorf destinations.

The coverage will include two fashion spreads created by editors hosted at Waldorf properties, one from the La Quinta Resort & Club in Palm Springs, the other by Waldorf Astoria Chicago.

Editorial coverage will be accompanied by Waldorf integrations with Harper’s Bazaar’s e-commerce store with a dedicated section at ShopBAZAAR.com/Waldorf, selling customized travel packages.

Shoppers can also buy clothes and accessories featured in the magazine’s editorial coverage, including designers and fashion houses, like Chloé, Gucci, Ancient Greek Sandals, Fendi, Oliver Peoples, Versace, and Theory, among others.

Both partners will promote the campaign through social media channels, blogs, and a dedicated e-mail campaign.

Waldorf is no stranger to luxury glossies, including custom publications.

In August 2013 Waldorf and Conrad Hotels & Resorts, both owned by the Hilton Corporation, launched luxury magazines specifically tailored to their hospitality portfolios. The Waldorf Astoria Magazine focuses on the environments and experiences available at its high-end properties; it is published with Rodale as a publishing partner.