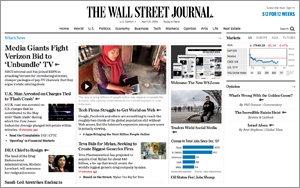 With mobile devices accounting for over one-third of all visits to newspaper Web sites, publishers are revamping their online presence to better accommodate mobile readers. This week, The Wall Street Journal unveiled a redesigned Web site that will be consistent across different devices, complementing its recently re-launched Android app.

The new design centers on engaging visual elements, with graphics, photography, and videos integrated throughout the WSJ home page and article pages. Site navigation has been revamped to make it easier to access the newspaper’s core coverage areas, like business, economy, and politics.

On the advertising side, WSJ Global Head of Advertising Sales Trevor Fellows noted: “The uncluttered background provides an elegant environment for display advertising, while our inventive native and custom executions will enjoy even more visibility and flexibility.”

The WSJ is also set to launch on the Apple Watch later this week.

The WSJ is part of a wave of business news org unveiling major redesigns.

In September, The Financial Times unveiled a major redesign of its print edition, including a redesigned front page with prompts for easier navigation, new color graphics and data and a new custom typeface.

Consumer news orgs are also getting makeovers. Last year, The Guardian unveiled a makeover including a new high-profile advertising placement that allows advertisers to dominate the Web page without interrupting visitors’ consumption of the news. And in January, the BBC also bowed a new Web site and mobile app, both intended to make its content easier to consume on smartphones and tablets.