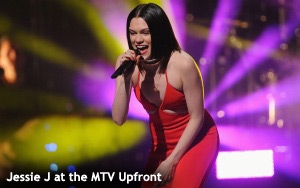 MTV put on an upfront presentation distinguished by the grossest opening seen so far in this upfront season.

On a giant movie screen in the 85-year-old Beacon Theater on Manhattan’s Upper West Side Tuesday afternoon, reps of New York’s media and advertising industries saw a severed head get tossed nonchalantly into a hot tub, then witnessed a young woman in a bikini being slashed across her midsection.

The filmed violence was a trailer for MTV’s new series called “Scream,” inspired by the movie series of the same name. The gory trailer, starring Bella Thorne as the slashing victim, was more shocking than scary, since it was doubtful anyone in the audience was expecting to see such a thing when they were blithely making their way to this upfront presentation.

MTV seemed quite proud of its trailer, though, as Thorne herself came on-stage to promote the new series. “MTV’s ‘Scream’ premieres June 30,” said Thorne, who then raised her voice to declare: “And I’m honored to be a part of it!”

“Scream” was one of several new shows MTV announced at its upfront. Thorne was just one of many MTV personalities who appeared on stage to talk up the network. Entertainment was provided by an up-and-coming band from New York called Mister Wives and, to close the presentation, Jessie J, the international singing superstar from England.

The co-hosts for the nearly one-hour event were Charlamagne from “Guy Code” on MTV2 and, from “Girl Code” on MTV, Nessa (another one-namer) and Carly Aquilino, who announced happily: “I’m the girl who just peed her pants during the ‘Scream’ trailer!”

Turning serious, Charlamagne became the first of several MTVers to tout the network’s following on social media -- a theme that gave the impression that, for MTV, social media tallies count more than mere ratings. “MTV has 220 million social followers – 220 million, OK?” Charlamagne said. “That’s a lotta scale and a lotta looks for your brand, and we’re smart as hell about how we connect with our fans 24/7 365.”

“Here’s the thing,” said Nessa, clarifying the position MTV seemed to be taking for this year’s upfront. “TV and digital are at their best when they work together.”

“MTV was again named the No. 1 global youth brand in 2014 because we’re everywhere,” added Carly, who didn’t cite the source of this “No. 1” ranking.

“That old measuring system that the industry uses doesn’t even come close to measuring everything that the MTV fans watch,” she said, taking aim at the way TV audiences are measured. “It doesn’t understand what a tablet is or how to watch something on a phone. If it did, MTV would be, like, No. 1 times infinity [!] because that’s how our fans consume content -- on their phones, on their toilets, all the time!”

Let the record show that the “toilets” remark seemed to be made on purpose, and it did get a laugh.

Attendees at the MTV Upfront also heard from MTV president Stephen Friedman and Susanne Daniels, president of programming. Daniels announced a handful of new shows, including: “Middle of the Night Show,” a late-night talk show; “Todrick,” starring Todrick Hall, who has accumulated millions of page views with his exuberant videos on YouTube; “Follow the Rules,” a reality series about the family of rapper Ja Rule; and “Greatest Party Story Ever Told,” featuring young people sharing stories about party hijinks.