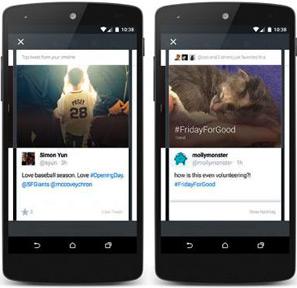 Twitter is aware that many users find their timelines to be overwhelming and filled with irrelevant tweets.
In response, the social giant is rolling out Highlights -- a summary of suggested tweets delivered daily to users by push notification.

“While your home timeline is a great place to browse through and engage with Tweets, we know it can be challenging to find the time to get through everything,” Gordon Luk, tech lead at Twitter, admits in a new blog post. “We want to help you get the most out of Twitter, no matter how much time you spend with it.”

When users opt in to receive Highlights, they can expect to receive notifications on their phone up to twice a day. Upon opening the notifications, users are taken directly into the Twitter app, where Highlights will be displayed in a new interface.

Twitter is on a mission to more effectively engage newcomer and prove its relevance to new and existing users.

To that end, the company recently revamped its homepage for people who are not signed-in to its service. Now, when users people visit Twitter.com, they are presented with topics to explore, including Politics, Pop Artists and, of course, Cute Animals.

Earlier this month, Twitter retired its #discover and activity tabs for all iOS and Android mobile users and moved trends to the search page. Trying to take the guesswork out of trend-spotting, Twitter is also added descriptions to trends -- and in some cases, more data about a trend and its trajectory.

Despite efforts to broaden its mass-market appeal, however, Twitter’s user growth continues to slow, according to a recent forecast from eMarketer. Last year, Twitter's U.S. user base grew 12.1% to reach about 48.4 million users, while user growth should fall into the single digits this year, eMarketer estimated.

By contrast, the number of U.S. Instagram users increased nearly 60% in 2014, bringing the social network’s domestic monthly user base to 64.2 million people, according to eMarketer.