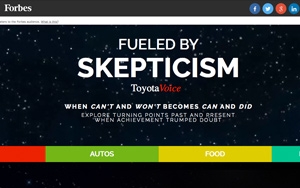 The new product launches are coming fast and furious at Forbes. The business media company announced the launch of a new advertising product called Pulse, intended to help marketers incorporate visual and interactive storytelling into campaigns appearing on the site.

The new tool will be available for “BrandVoice,” Forbes’ native ad program, as well as editorial ad placements.

Each campaign executed with Pulse includes a custom-designed page on Forbes.com, linked to content ads on the Web site as well as in the print magazine.

Pulse is already being used by Toyota in its new BrandVoice campaign on Forbes, on the theme “Fueled By Skepticism,” promoting awareness of hydrogen fuel as an alternative energy source. The native ad campaign explores this and other ideas that skeptics dismissed as impossible before they achieved success, using video, creative data graphics, and trivia questions.

As noted, Forbes has been cranking out new products at an impressive clip since being acquired by private equity owners last year. Last week, for example, it announced that it has licensed its name and brand to SocialPort, a system created by rFactr to help companies optimize marketing content across different social platforms, with a focus on social selling in B2B marketplaces.

In March, it acquired Camerama, a cloud-based photo-sharing app that allows users to control who can see their photos via invitation. Forbes said the Camerama technology will serve as the basis for a new platform of apps, as part of the company’s drive to build an online social hub around the Forbes brand.