From 'Mad Men' To 'Happyish,' TV Portrays The Evolution Of Advertising 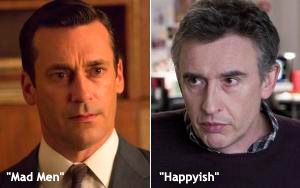 Would Don Draper recognize the advertising business in the era of Thom Payne?

As everyone knows who’s reading this, Don is the adman character in “Mad Men.” Today, he would be something like 85 years old (if he is supposed to be, say, 40 in 1970, the current year being portrayed in the final episodes of “Mad Men” now airing on AMC).

Thom Payne is the lead character in Showtime’s new series about the modern-day ad biz, “Happyish.” Payne (whose name mimics the name of the author of “Common Sense”) is 44, having celebrated his birthday in the premiere episode of this series last Sunday night.

In their respective shows, both of these admen are in the midst of navigating upheavals in their workplaces. On “Mad Men,” the Sterling Cooper agency is being absorbed by McCann Erickson, a move indicating that Sterling Cooper will cease to exist, even as a semi-independent entity. Plus, the staff of Sterling Cooper now fears redundant positions will be eliminated, costing some of them (and maybe many of them) their jobs.

Here in the present day, Payne and his colleagues at the fictional New York agency of McMann Goldsmith & Tate are also facing a situation involving corporate overseers coming into their offices with the goal of changing the way the firm does its business.

Predictably, these younger creative types seem capable of talking about advertising only in terms of social media, as if advertising didn’t exist before Twitter and Facebook were invented. In an address to the agency staff, they specifically target one of the firm’s long-time clients -- Keebler cookies and its famous animated elves -- as being in dire need of a social-media upgrade.

At the meeting, Payne protests, proclaiming that Keebler just had its best year ever and questioning why anyone in their right mind -- i.e., potential cookie buyers -- would want to “follow” the Keebler elves or other brands such as Pepto-Bismol on Twitter.

The twist in the scene was this: Far from being triumphant, Payne’s attempt at knocking some common sense into these young creative types fell on deaf ears, and Payne had to suffer the embarrassment of seeming out of touch with current advertising trends.

On “Mad Men” last Sunday, it was Don Draper who came up with a plan to try and counteract McCann’s attempt to absorb Sterling Cooper. Under his plan, Don and the rest of the firm’s top management would set about trying to secure commitments from various clients that would help Sterling Cooper bolster its case for maintaining semi-autonomy from McCann.

Don then created a presentation that he intended to deliver to McCann’s top executives during a conference room showdown. Don was uber-confident that this plan would succeed, mainly because this is how he and Sterling Cooper had long done their business -- meet with clients, discuss their needs, and then wow them with a presentation from Don Draper, the king of presentations.

But something different happened this time. Don didn’t wow anyone. Instead, he was cut off after about a half-minute by the president of McCann, who informed the Sterling Cooper group that the planned absorption of their firm was a fait accompli.

From now on, there would be a new way of doing business -- McCann’s way. Like Thom Payne, Don Draper was this storyline’s man out of time -- someone for whom the old ways of doing business were not working anymore.

“Happyish” has only just begun, so we have plenty of episodes left in this inaugural season to learn where Payne’s confrontation with the modern age will lead him.

“Mad Men” is almost over. Only three episodes are left -- including the finale on May 17. That’s a lot less time to learn what will happen to all of the many characters on “Mad Men.”

As for Don Draper recognizing the ad biz today, that depends on whether he kept pace with the evolution of the industry while enjoying his retirement -- or that Draper, a long-time smoker and hard drinker, would live that long.