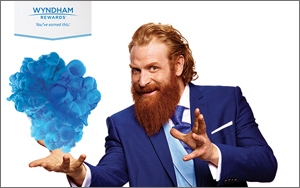 Wyndham Hotel Group is launching a $100 million global campaign to support the launch of a new loyalty program.

The campaign stars Norwegian film actor, producer and writer Kristofer Hivju from “Game of Thrones” and “Force Majeure.” He plays a character in the ads called the “Wyndham Rewards Wyzard.”

“The Wyndham Rewards Wyzard is the anchor of our campaign,” Lesnick tells Marketing Daily. “He’s a modern, colorful and empowering character who exists to recognize loyal travelers with richer, more generous rewards because they’ve earned it.”

The effort includes TV and radio spots, digital media assets and on-property collateral at more than 7,500 hotels worldwide. Also featured is a summer promotion where members can earn 3,000 bonus points after just one qualified stay, now until Sept. 7.

It was conceived and produced in partnership with People Ideas & Culture’s Group Company CY&N by PI&C.

The campaign uses a fun, whimsical approach to show how simple and easy it is for members to earn and redeem rewards across the hotel company’s portfolio of brands.

“In bringing his unique flair and personality to the role, Kristofer has nailed it,” Lesnick says. “He’s truly brought the Wyzard to life.”

In the TV, the “Wyndham Rewards Wyzard” magically appears with his signature blue smoke to reward members during their travels. Creative plays up the simplicity and ease of the new program and underscores the campaign’s core tenant and tagline, “You’ve Earned This.” The “Wyzard” marks the first advertising character ever used by the company in an umbrella marketing campaign.

Debuting globally but with a focus on the U.S. and Canada, the campaign includes multiple TV spots breaking this week on cable networks such as ABC Family, ESPN and TBS, along with digital video, radio and unique social media content.

The loyalty program offers members a points earning structure along with a flat, free night redemption rate. Features include “Go Free” where with 15,000 points, members can redeem a free night at any of the program’s more than 7,500 hotels globally with no blackout dates. “Go Fast” allows members who want to redeem their points sooner or stay longer for less to book a night at available hotels for 3,000 points plus cash.

Finally, “Go Get ‘Em” entails that for every qualified stay, members earn 10 points for every dollar spent or a minimum of 1,000 points per stay, whichever is more.