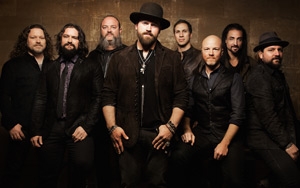 Indian Motorcycle, the oldest American motorcycle brand, which rolled back onto the U.S. bike scene for real last year, is also twisting the throttle on marketing. The brand is partnering with the Zac Brown Band as part of a program around Armed Forces Day. Brown and his band will serve various roles as brand ambassadors for the motorcycle marque, including around the association that Indian just signed with the U.S.O. (United Service Organization).

The campaign, which has a grassroots focus, was preceded by a video series to tout the heritage of Indian's Scout motorcycle, which the brand reintroduced last year. In the videos, actor Mark Wahlberg details the 115-year-old brand’s involvement in U.S. military campaigns during the two World Wars.

The Zac Brown Band, which has done several U.S.O. tours, will meet with select troops on behalf of Indian on some stops of their 50-city North American Stadium Tour. The tour supports their new album, “Jekyll + Hyde.”

The band will donate tickets to each of its 50 shows for Indian Motorcycle to provide to military personnel and first responders, per the company. Indian's new partnership with the U.S.O. includes a pledge to donate $100,000 to the organization this year. Indian has also just added a motorcycle discount for current and retired military personnel.

Tour stops at Charlotte, N.C., Virginia Beach, Denver, Philadelphia and Chicago will feature an Indian-driven “premium concert experience” for troops selected by the U.S.O., including perks such as a meet-and-greet experience with the band, pictures and autographs, and an exclusive video presentation.

Steve Menneto, VP Motorcycles at Medina, Minn.-based Polaris Industries, which purchased the brand in 2011, tells Marketing Daily that the company has been aggressive in rolling out new products, basically going from zero to six, from the ground up, since 2012. “It was a challenge when we took over and purchased Indian,” he says. “Normally, the product development cycle is a 48- to 60-month project. We did it in 27 months because we knew the brand couldn't go that long without having product in action.”

Menneto says Indian competes with Harley-Davidson, but that Indian is more about premium, refinement, luxury, and heritage around a 115-year-old brand. Polaris’ other road-bike brand, Victory, keeps its distance from Indian as well, since it has been developed as “a modern, edgy, and more performance-oriented bike,” he says.

With six bikes in the lineup, under three model platforms — Scout; Indian Chief Dark Horse, Classic, and Vintage; Chieftain; and Roadmaster — this is the first time in over half a century that Indian has had a bona fide lineup of bikes. Menneto points out that between 1953, when Indian went under, and 2011, the brand surfaced now and then under the aegis of different owners who had limited R&D and marketing funds. “What we'd say is that in 2011, it found its rightful home again: there's a similarity between the old Indian and Polaris; it's product innovation, being a company of firsts.” Polaris had 2014 sales of $4.5 billion across all-terrain and side-by-side vehicles, snowmobiles, motorcycles and on-road electric/hybrid powered vehicles.

The company has moved fast with Indian on the retail front as well. When Polaris acquired Indian, there were fewer than 10 dealers selling it, says Menneto. “We had to come out with new models, create a dealer base, and with not lots of marketing behind it.” Now, he says, the company has over 200 dealers in and 150 outside of North America. “We are not only launching a bike, but a business, too.”