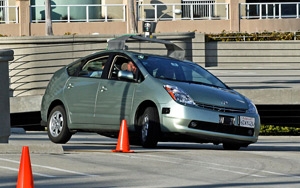 Google's self-driving cars will roll onto public California roads this summer. The latest version lacks airbags and other federally required safety features, so it can't go more than 25 miles per hour. It's electric, requires frequent recharges, and it can only drive in areas mapped by Google.

Not all, but a "few of the prototype vehicles we've created will leave the test track and hit the familiar roads of Mountain View, Calif., with our safety drivers aboard," Google wrote in a blog post Friday.

The next phase of the project will have safety drivers on board with a removable steering wheel, accelerator pedal, and brake pedal that allow them to take over driving if needed. Google will look to answer other questions such as where the car should stop if it can’t stop at its exact destination due to construction or congestion.

Google has been testing the self-driving technology with software that the company put in a fleet of Lexus RX450h SUVs that have been on public roads, but this summer will hold the first public-road test of cars Google built itself.

Self-driving cars require a special license to operate and are available only to those testing the vehicles. For the most part, the company has been testing the car off city roads. The news comes after Google recently said that its autonomous cars have been involved in nearly a dozen minor accidents during the past several years of testing.

"Four of the nearly 50 self-driving cars undergoing tests on California roads since September, when the state began issuing permits to auto companies, have crashed," reports the Los Angeles Times. "But the cars, three owned by Google and one by Delphi, were in collisions caused by human error."