KFC 'Brings Back' The Colonel, And Even The Word 'Fried,' For 75th Anniversary 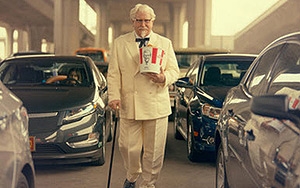 KFC is looking to get some of its old sizzle back by remodeling its restaurants, introducing some new menu items, redesigning its packaging and rolling out a major new campaign that not only brings back "The Colonel," but allows him to use the brand's original, full name, "Fried" and all.

The campaign includes three television ads in which "Saturday Night Live" alum Darrell Hammond plays Colonel Sanders, the chicken salesman who perfected his "Original Recipe" of 11 herbs and spices in 1940 and parlayed a roadside stand into a chain that today has 4,300 locations in the U.S., and some 19,400 total around the world. KFC says its rebranding push is in tribute to the 75th anniversary of the Original Recipe.

The real Colonel, Harland Sanders, died in 1980, and while his image has continued to be featured on the chain's iconic buckets, it hasn't been seen in advertising for more than 20 years.

In the first TV spot, "The State of Kentucky Fried Chicken Address," the Colonel, played by Hammond with a folksy Southern accent and frequent, cough-like laughs, straightforwardly points out that he's been "gone for a while," and proceeds to express amazement at how things have changed in his absence.

"Nowadays you got your International Space Station, your double-sided tape, your cargo pants — you seen these pants? That's too many pockets,” he says. "But what you don’t always seem to have these days is my Kentucky Fried Chicken. Well, I'm gonna change that, folks. I'm gonna make sure my chicken's still as tasty and delicious as it ever was. I'm Colonel Sanders, and I'm back, America."

In a second spot, he sings to himself about needing nothing but a bucket in his hand (which he has) as he strolls through a major traffic jam and around a baseball diamond and other venues. In the third ad, he is backed by a mandolin band, and jokes about mandolin music being "America's favorite" music, again announcing that he's "back." That ad ends with an actual banner featuring the original, full Kentucky Fried Chicken name.

The ads, from Wieden+Kennedy, will begin airing on May 25, but can be viewed now on KFC.com, which also has been redesigned as part of the rebranding. They're also being featured on the brand's social media channels, including Twitter, Facebook and YouTube.

The brand also relaunched ColonelSanders.com, which now features the "Hall of Colonels," an interactive digital experience that tells his colorful life story, and ColonelQuest, a game that challenges players to master various scenarios inspired by the Colonel's life.

The new menu items include Finger Lickin' Good Sauce (made with Original Recipe seasoning to complement the chicken) and Kentucky Baked Beans with Slow Pulled Chicken.

The restaurants' new design, featuring an updated, more colorful look inside and out, has been tested in Louisville, Ky., and Las Vegas, and will be rolled out across U.S. locations over the next few years. The buckets and other packaging have been refreshed with a contemporary-looking illustration of the Colonel's famous visage.

Restaurant industry experts have said that this latest effort to reinvigorate the Kentucky Fried Chicken brand is sorely needed, although the results of returning to the brand's marketing heritage (no doubt in part an appeal to Millennials' fondness for vintage ad campaigns that they weren't around to see the first time the ads aired) of course remain to be seen.

Unlike the short-lived Orville Redenbacher TV spot of 2007, which was widely pronounced creepy for using digital technology to make it appear that the deceased brand founder himself was delivering a pitch for the popcorn brand, Hammond's impersonation of the Colonel is decidedly tongue-in-cheek and would also appear to align with Millennials' well-developed sense of irony (although Inc. blogger Chris Matyszczyk wrote that he finds the Colonel portrayal "weird" because of its similarity to former President George W. Bush.)

The brand has proved remarkably adaptive over the decades, a prime example being its effort in the early 1990's to distance itself from the negative connotations of "fried" by gradually shifting its identity to the initials KFC and adding skinless and even some non-fried versions of its famous chicken to its menu.

In 2007, after getting more bad press as a result of using high trans-fat palm oil in frying, KFC switched to using trans fat-free soybean oil.

But in more recent times, the brand's biggest challenges, at least in the U.S. market, have come from a flock of competitive chicken chains offering simpler, though not necessarily more "healthful," menus, newer, more welcoming facilities and superior customer service.

Although KFC's U.S. same-store sales actually rose by an impressive 7% in the quarter that ended in March (and its worldwide sales grew 4%), it's been losing share in its home market for years now to chains like Chick-fil-A and Popeyes (and more recently, like other legacy QSRs, to fast-food chains offering healthier options, like Chipotle and Panera).

KFC's share of the limited-service chicken restaurant segment has dropped from nearly 40% in 1999 to 20%, while Chick-fil-A's has risen from about 9% to nearly 28% during the same period, according to a Technomic and Janney Capital Markets analysis cited by USA Today.