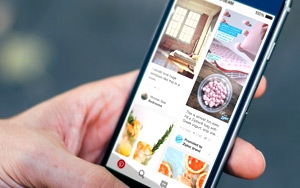 Spearheading the changes -- which are expected to launch throughout the summer -- is Tim Kendall, Pinterest’s first general manager of monetization.

After heading up product management for three years, Kendall will now oversee the sales, marketing and product development for Pinterest’s ad and partner solutions.

Kendall on Tuesdsay said the changes are a direct response to advertiser feedback, since Pinterest launched its Promoted Pins program, last year.

“Marketers are very interested in the ways users have interacted with their content [on Pinterest], from discovery, to search, to taking clear actions,” Kendall said. “By addressing these key user modes, we’re creating a full-funnel solution for any marketer of any size to meet their objectives.”

To help with the discovery process, Pinterest is launching Cinematic Pins -- a video-based Promoted Pin that users can control by scrolling. In addition, Pinterest is making its App Pins promotable and available on a cost-per-action basis. New audience targeting lets brands target Promoted Pins based on interests, “personas” or “life stages” like millennials, foodies and travelers.

In addition to its existing premium cost per thousand (CPM) and cost-per-click Promoted Pins, Pinterest is now rolling out a cost-per-engagement model. Pinterest will measure engagement based on re-pins, “close-ups” -- when users zoom in on particular pins -- and clicks.

“Advertisers only pay us when we deliver on the objective of intent,” Kendall said.

Also, a new in-house creative team dubbed The Pin Factory will serve as creative studio for brands looking for creative ways to best reach Pinterest users. “It’s a couple folks to start [but] it will grow over time,” Kendall said of The Pin Factory.

With all the changes, analysts say Pinterest is exploiting its standing at the intersection of social, search and ecommerce. “Pinterest has a unique positioning in that it's both social and search,’” according to Debra Aho Williamson, principal analyst at eMarketer.

“Now the company has offerings for all stages of the marketing funnel for businesses of all sizes, where previously most of its ad products had been aimed at brand advertisers,” Williamson added.

Among other challenges, the vast majority of Pinterest's audience remains female -- totaling 39.2 million or 83.3% of all U.S. users this year, eMarketer estimates.

Even though its male user base is increasing at a more rapid rate than its female audience, males will barely crack 20% share of Pinterest's U.S. audience by 2019.