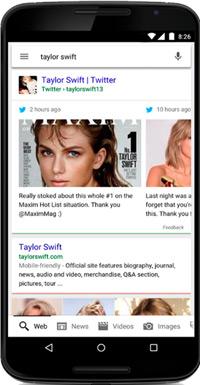 Google and Twitter have made it easier to find tweets on Google's search engine. The two companies struck a deal, announced this week, to serve real-time tweets in Google search results in the United States. Twitter search results will become available in the Google app and mobile Web. Desktop search will follow.

The deal will likely turn Twitter into a tool to drive leads from Google's search query results to publishers or merchants. Clicking on the Google results connects users to Twitter where visitors can explore other topics.

Google said the update is a way to get real-time info when something occurs, but it also provides an avenue to see additional information on any specific subject, as Ardan Arac, a Google senior project manager, explains in a post.

It's not clear if Google gives Twitter an extra boost in rankings, but a search for "Wyoming Twitter" on Google serves up more than 76,800,000 results. It ranks the tweet results above the news.