Apple Acquires Metaio: Time For AR TO Get Real 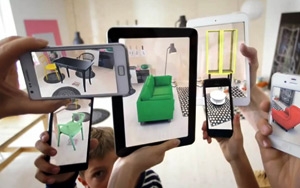 Augmented reality has been one of those dazzling technologies that always seems in search of a solid and scalable use case. Its ability to combine real-world situations and images with digital overlays of information or additional imagery is at the heart of the ongoing fantasy to combine both worlds effectively. But most of AR, from pop-up images on Lego boxes years ago to IKEA’s interactive catalogs to Google Glass HUD interfaces, continue to feel like small-scale tests.

Much like QR codes, visual search, audio recognition and other attempts to knit together real and virtual data, AR always suffered an inconvenience factor. You had to remember you had the capability on an app, then pull out the phone, find and load the app, aim, activate -- and then usually get an experience that was capable of impressing you for five seconds, just once.

In other words, the AR marriage of real and virtual never really mainstreamed into everyday use. These systems for activating real-world objects and experiences can only hope to scale when they becomes more of an automatic reflex. Just as most mobile users now react to an exceptional experience by remembering they have a phone camera to record the moment, AR needs to invoke second-nature behaviors in users.

Apple’s reported acquisition of augmented reality pioneer Metaio is exciting because it may bring us closer to turning AR into a reflex. According to Reuters and others, Apple is now listed as the sole stockholder of the German AR company, although Apple has not officially acknowledged the purchase.

Interestingly, this company was spun off from Volkswagen. Metaio has massive early experience in applying AR in a number of ways, enhancing consumer catalogs, car maintenance manuals, and location-based overlays. Its continuous visual search technology is especially impressive, able to scan and recognize a series of objects that pop in and out of view. Metaio can tie back to a huge visual database of products to pull in additional information.

In fact, Google Goggles made a splash many years ago with a visual search app, but it seemed to whither. Most of these solutions suffer from being a couple of times removed from the core technology of the phone: the camera. Relying on third-party apps just puts these technologies one or two steps away from actual use.

There were a lot of reasons for Apple to buy Metaio, including the former's microprocessor work and the prospect of competing in the VR and headset arena. It recently patented some iPhone-driven VR technology, and it is reportedly working on a geo-located search technique that overlays local business listings when you point the iPhone down a street.

I for one would love to see an AR toggle baked into my phone camera. A lot of these activation  technologies have just been waiting for an easier way to remember and use them.