Lycos Turns From Roots In Search To Launch Wearable Devices 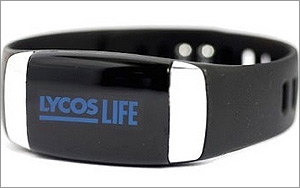 Lycos, one of the first Internet search engines and portals, took a another turn Thursday by announcing that next week it will launch Lycos Life, a line of wearable devices that serve as a gatekeeper for a range of gadgets and appliances that connect to the Internet.

Twenty years ago Lycos was trying to solve the problem of simplifying search on the Web. Now the focus has turned to simplifying the use of Internet-connected devices initially through two products, the Band and the Ring, said Brad Cohen, Lycos president and chief strategy offer, during a press conference.

The accelerometer, heart rate monitor, and sensors make the Band smart, he said, adding that "very soon, the Band will know who you are based on the way you move. We all have a unique way of walking and moving our bodies."

The goal of Lycos' latest wearable strategy is to simplify the digital lives of consumers through one device that can increase the effectiveness of workouts, pay for groceries, unlock passwords and share messages. The features will initially reside on two products -- Band and Ring -- along with an app for the smartphone. The motion of tapping the Band or the Ring to the phone will transfer data with help from near field communication (NFC) semiconductor chips in the wearable devices and the smartphone.

Apple and Google use NFC to make their respective payments services possible, but the products will initially only become available for Android devices.

"It all starts with a password," Cohen said. "It's a big project and a big hurdle to solve. … But when you're looking at a potential $20 trillion dollar industry in the next 10 years, it's a massive opportunity."

Tapping an Android phone with an NFC chip to the Band will unlock phone and initiate the Lycos Life app, which will act as the "mission control on your wrist, unlocking a suite of products on the app," Cohen said, explaining that the password management system in the app will allow the user to store all their passwords for a suite of products.

As long as the user remains in the proximity of the phone, the Band will remain connected. The company plans to add features in the future that support additional proximity features. The Band will initially offer collaboration between LYCOS Life devices through Tap2Transfer (T2T) communication, an advanced fitness monitor and activity tracker, and the ability to securely and seamlessly log into favorite apps.

All a tall order for a company spun out of Carnegie Mellon University in 1994, from a research project by Michael Loren Mauldin. The company went through several acquisitions, and in 2010, landed in the hands of Ybrant Digital, an Internet marketing company based in Hyderabad, India.

Through the Lycos Life Project, the company will give back through the sale of every band and ring. Five percent of each sale will go toward a humanitarian project the company is launching to distribute free water quality sensors and free air quality sensor in critical markets around the world.