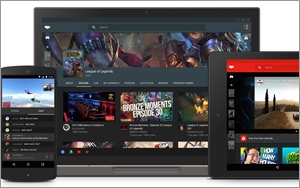 Google will take on Amazon Twitch with a live streaming gaming site of its own. YouTube Gaming launches this summer in the United States and the United Kingdom. It's being built specifically for gamers with advanced search and high-speed streaming features.

The announcement comes just prior to E3, which rolls into Los Angeles this coming week. The dedicated Web site will become home for all YouTube's gaming video, live-streamed and on demand.

More than 25,000 games, "Asteroids" to "Zelda," will reportedly have their own landing pages for related videos alongside dedicated channels from game makers and YouTube content creators. Google said gamers will find a wide range of game publishers and YouTube creators.

In the coming weeks, Google plans to launch an improved live experience that makes it simpler to broadcast game play on YouTube. Making it possible are high frame rate streaming at 60fps, DVR, and automatically converting streams into a YouTube video. Google is redesigning the system so users no longer need to schedule a live event ahead of time, and creating single link to share for each user's streams, explains Alan Joyce, YouTube Gaming product manager, in a post.

Amazon acquired Twitch in August for about $970 million. The live streaming site last year because the fourth-largest source of U.S. Internet traffic, after Netflix, Google and Apple, according to DeepField. The report also suggests Twitch averaged 100 million viewers a month worldwide at the end of 2014, more than double the number it attracted the prior year.

The challenge Google's YouTube faces becomes catching up with a company, Twitch, which found a way to incorporate entertainment into its focus on games.

On Friday, Twitch began moving past gains. The company announced “Twitch Specials,” a promotional program for showcasing unique content for the community. SFXEntertainment, the leading producer of global live events, media and entertainment content focused on electronic music culture, is the first company to take part in the program beginning with their upcoming broadcast of the React Presents: Spring Awakening Music Festival.